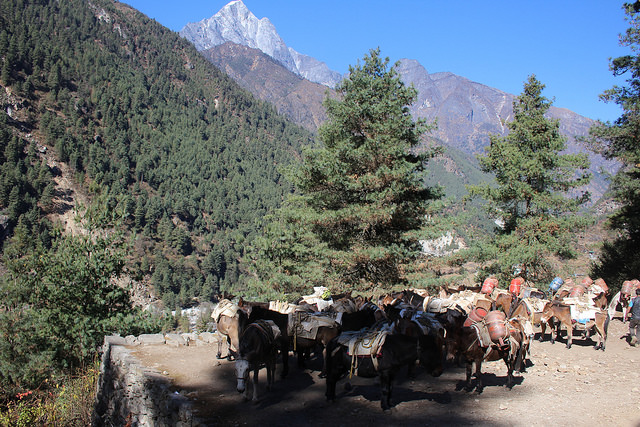 Despite having little to do on my first morning in Kathmandu, my body clock still woke me up at 6:30am, which was probably a good idea given the next few weeks of early mornings ahead of me. Lazy breakfast and a brief wander around Kathmandu before heading towards the briefing, which is the time to meet my travel companions for the next 2 weeks. 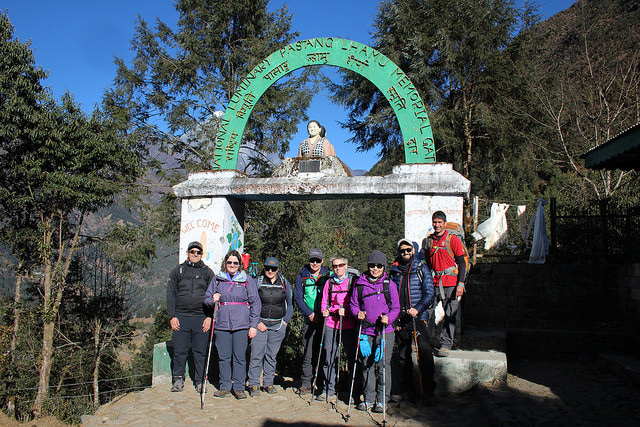 In the group we had 3 from New Zealand, 1 from Australia and 3 from London (including myself). An 8th person was supposed to be joining us, but never turned up. We did initial introductions, filled in paper work, got a briefing on altitude sickness and an overview of what we would be experiencing in the next few weeks. Then off to buy last minute things before meeting up again for dinner and early night. first day was very low key.

The start of the next day was less so; meet up time was 5:15am, we were booked on a 6:15 flight. Now we started to see the type of peple we were traveling with. Four of us were early (that would include me), 2 were bang on time and the last? The last had to be got out of bed and helped finish suitcases as they’d heard 5:45 somehow! No matter, it was a short ride to the airport, some random security, a pick up of our hand written boarding passes and then we wait for them to call the planes. 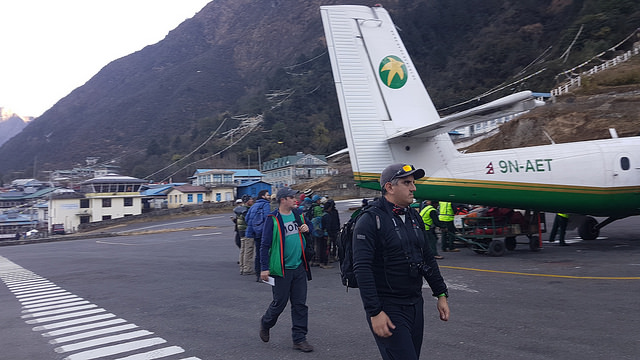 Lukla flights tend to be first thing in the morning; the turbulence and visibility gets worse later in the day. So you have planes doing a shuttle run every morning, with very quick turnarounds. We were on the first flight out. grab your seat, any seat, a quick briefing and off we went. No cockpit lockign here, we could see right through the window. The airport has a reputation – you land uphill, into a cliff, quick get unloaded and the plane picks up the next lot and flies back down the slope. 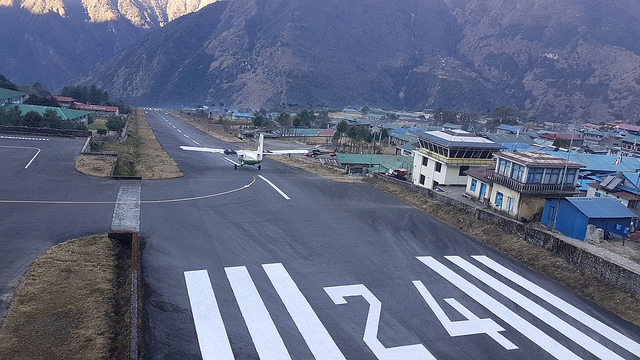 Our bags were grabbed by our guides and we headed off to breakfast before starting the first day hike.

You’re reading that right, the first day is downhill. It’s a try out day, a day to check your gear and how you are coping. Total distance is about 5m, but you have the start of some altitude and a few uphill sections to try out your legs. It took us about 4 hours and we were in the lodge in time for lunch. For the rest of the day we chatted and lazed around; after dinner it was the first of our early to bed days, which tended to be a theme as we headed up the mountain. 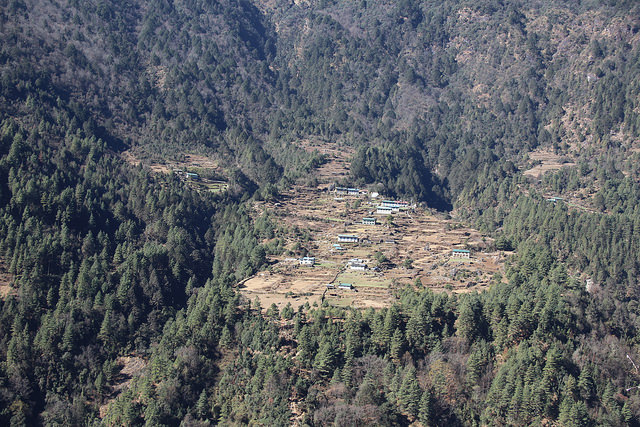 the first day’s hike definitely lulls you into a sense of false security. This isn’t too bad you think..welcome to Day 2 which quickly disabuses you of this notion. We carry on walking along the river valley, crossing over various suspension bridges, back and forth on both sites of the Dudh Kosi River. You pass through lots of litte villages, all catering to tourists in some way. And you’re learning the best way to avoid yaks (and variants) and donkeys. Yak and donkey trains take priority. They’re the goods movers of this part of the mountains, more so than people.

We’re still in wooded country, trees and rhododendrons. but we’re getting glimpses of snow covered mountains ahead. Finally we catch a glimpse of the famous double suspension bridge. The bridge is amazing, the thought of what lies ahead less so. An 700m climb straight up towards Namche. Ouch, seriously hurt. slowly, slowly, one foot at a time. Lots of steps, lots of dust and loose stones, the paths are not the easiest. You can really feel the reduced oxygen available by now, you’re out of breath almost with every step. 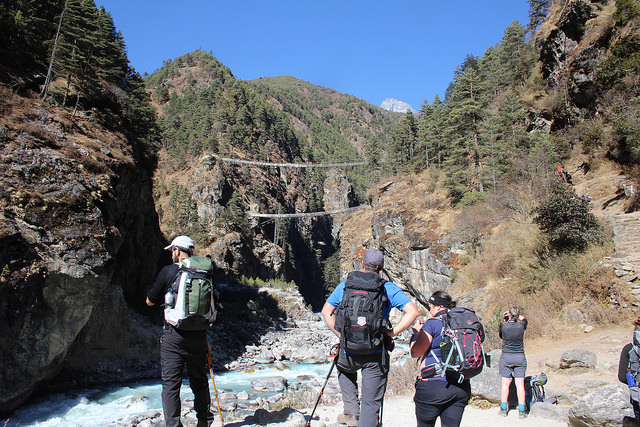 We do get our first glimpse of Everest though; a view point perfectly aligned with the valley beyond. Just the tip – although that’s all we usually see, just the top of a mountain hidden behind others. 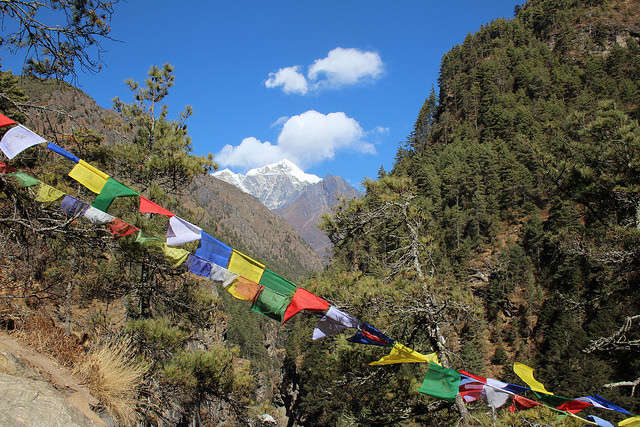 Finally, finally we reached Namche and climbed up more steps. The whole village is built around a bowl in the hills, so there are steps everywhere to get between levels. Never has a lodge been so welcome! And food, I’m not yet bored of the choice of potatoes, rice or noodles. 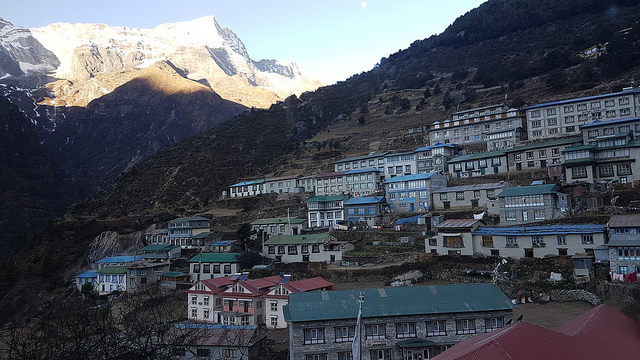 Another lecture on Altitude sickness, a reminder to start taking Diamox and a time for measurements – HR (120) and O2 (88%). These would be taken daily to assess our adjustment.

A day in Namche

No advancement today, time for acclimatisation. We go for a further up the hill, to the National Park Headquarters and the famous status of Tenzing Norgay, with more views of Everest. The weather was blue skies again, something we had a lot of during our trek. It was surprisingly warm, we were all in a single layer for most of the daytime Then back down in time for lunch (fried potatoes and cheese for me). This was our final chance to buy any trekking gear, or to stock up on food. Also more chance to find out about the team. Myself and T are the least experienced in the bunch – and possibly the least fittest. Despite the training I’d done, it was not enough. R is definitely the fittest and you could see at times over the trip his frustration that he needs to stay with us slow people, but that is the risk when you come along with a random group. We all charged up phones etc and took a chance for a hot shower, the last one we would see for a while. 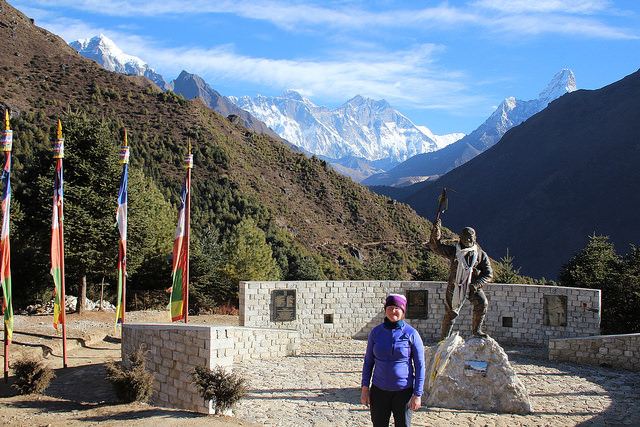 Another early night, but not after my stats were checked. HR had come down to 96, my body was adjusting; the O2 was still at 88%. I was happy – sleeping the previous evening was not easy, i really thought that I was not going to be able to go further. My first time at altitude and all you can do is follow the rules – walk slowly, drink lots of water, take the pills and hope your body adjusts.