I’m guessing by the time I finish this report on my Everest Base Camp trek it’ll be a year old? Anyway, let’s start this again. When you last read an installment, we’ made it to Namche Bazar and had just finished our first acclimatisation day. Next we were heading further up the valley. 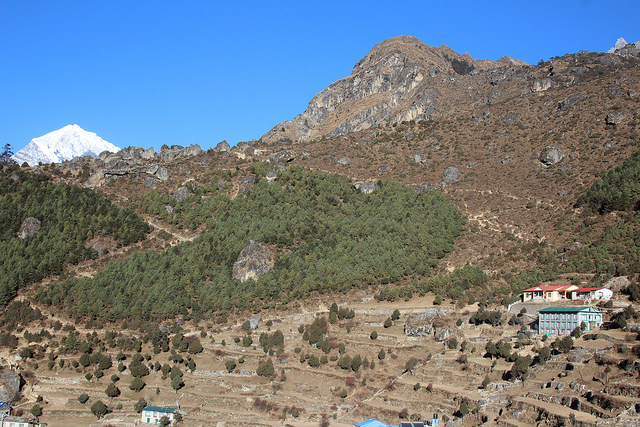 Early mornings started in earnest; up at 6:30, out walking by 8:15. A long hard day ahead, multiple terrain, following a slightly less followed track. Blue skies and warm weather at least made it pleasant to walk in. Before we hit the trails though, we had to escape Namche Bazar, about 20 minutes walking up through the town, lots of steps. One area appeared to be a staging post for yak trails; with one batch starting out as we went by. Possibly the most dangerous part – I was saved from a knocking by a rapid reaction of a guide as one of the yaks suddenly decided to change path and head at me! Once out of the town, we found the nicest part of the trail, well made and wide, hugging the hillside. Another 20 minutes, we went by the man responsible, someone who seems to spend his days making the path, accepting donations from all the trekkers. Beyond that point, it got a lot rougher. 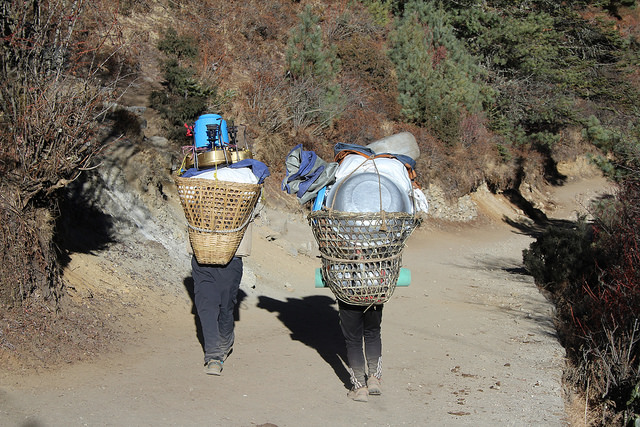 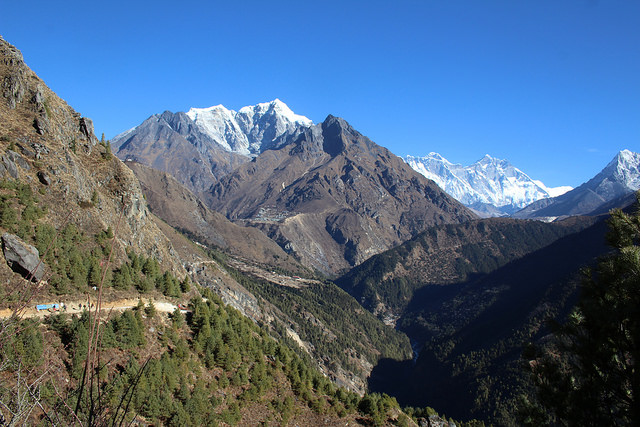 Looking towards Phaortse. the blue roofs in the distance.. The wide path to the left

We climbed all the way to our lunch stop, at 4375m, a lovely place where we could look down on our evening stop. After lunch, at 4375m, the path got narrower, rockier and edgier – a lot more edges. We went down and down…and at this point it was really brought home how I hate downs. Distance judgement off, never quite sure of step, head down focusing on my feet, never looking around. The a break, a river crossing and uphill again. The paths up to the village are so dusty, you’re continously breathing it in and everyone is starting to develop a cough from this, which continues for the trip, not helped by altitude. The village of Phaortse is different from any places we stop off, less touristy with fewer lodges. narrow walled paths between fields. Finally our lodge, owned by an Everest Climbing Sherpa – the certificates are in the common room. Dinner (dhal bat) and obs (HR96, %O2 87) and early bed.

The trek from Namche Bazar to Phaortse 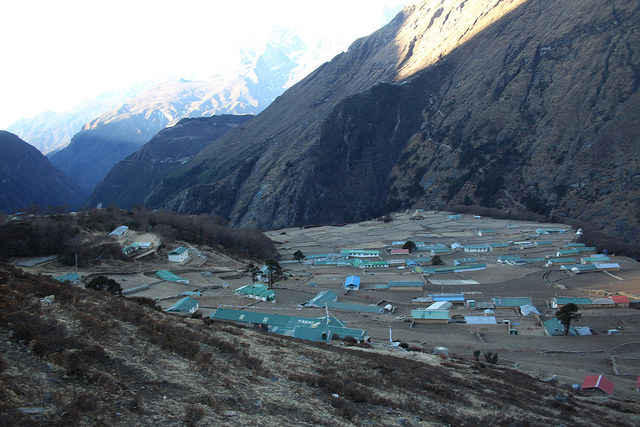 We were out the door early today, 7:45. Altitude was really starting to bite, with many of the group not having to slept well. Up out the village, around a muntain and then one horrible bit down. I have to admit to having a little cry when I got to the bottom of that path, a stress release given how terrified i was all the way down. For me, that was the worst path of the whole trek, not something I’d like to repeat! In general, today was a slow day for all. The effort was telling in the legs, it was a hot day and the path was difficult. We’d split up by lunchtime, with 15mins between front and back – but as they kept telling us, going at own pace, slow and steady, was best way to deal with the effort needed and the altitude impact. 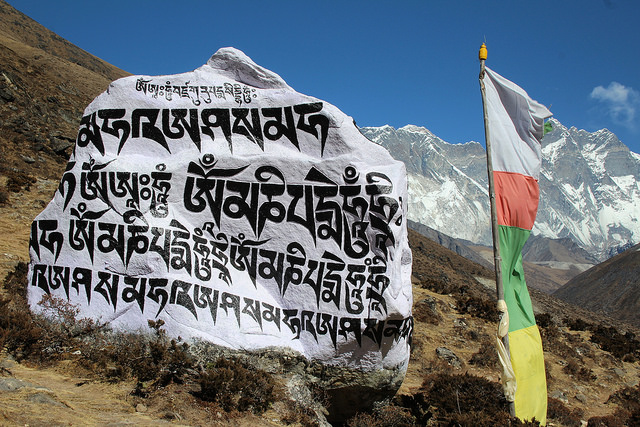 So far, I’ve been fine with symptons (except for breathlessness) but some in the group having bad headaches and dizzyness. We’re being reminded to drink lots, which is made more important with the temperatures. A long day, only reaching the lodge just before sunset, when it’s time to change from tshirts to full thermal kit – it gets cold! Time for food and obs – my HR is 119, struggling a little, %O2 83. Unfortunately, the day has proved too much for AF, – a %O2 of 64. That’s serious. Rechecks and concerned faces all around. Decision is drink lots of warm water, rest for now and check again in the morning before decision made. 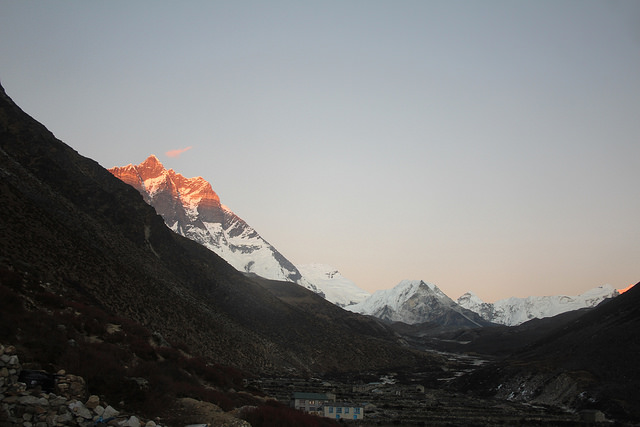 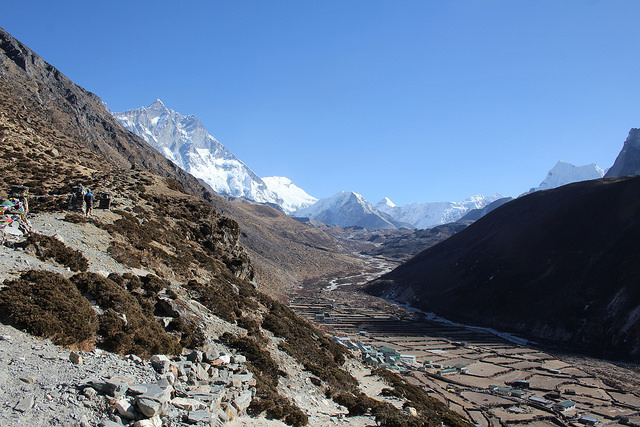 Unfortunately, AF did not get much sleep – I was in the next room and heard her couging a lot. Very very early, I hear lots of coming and going from the room, checking things out. No improvements, so a decision was made to evacuate her down the mountain when she could still walk, even if she needed support – accompanied by 2 guides and a porter. A guide was back for lunch, reporting that she was feeling better at lower altitude, after food and drink and was now on her way further down under her own power. So now we were down to 6 – AF’s boyfriend had been told to stay with us and finish the trek. 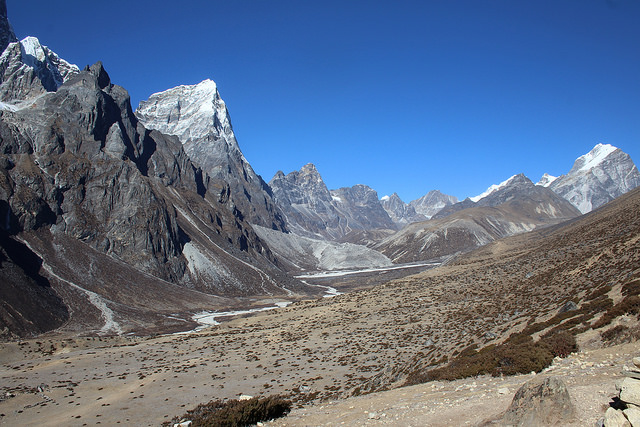 Today was our 2nd acclimiatisation day, so a late start of 9am was allowed. Today’s route is simple – straight up 400m or so to about 4800m, then down for a late lunch before lazing (and drinking) the rest of the day away in our suntraps of rooms, gloriously warm. I needed it, as I now had a touch of the cold that had been brought into the group, leading me to have a very poorly chest. At the end of the day, HR was down to 106, %O2 up to 86. 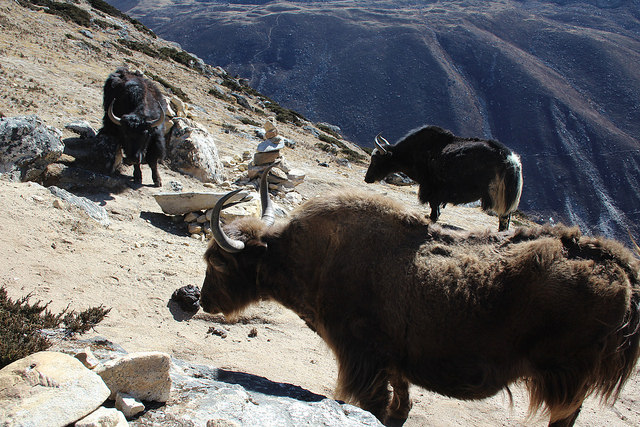 Now onto the final stretch. An easier start to the day, as we travel along a glacial valley, a fairly horizontal walk compared to some. Plenty of yaks grazing, minimal steps to go up and down. 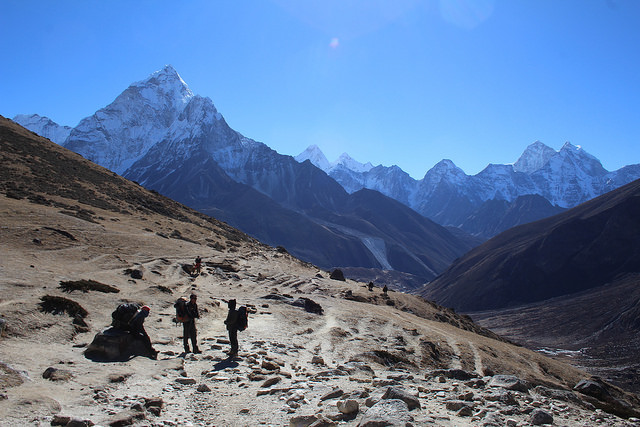 It’s a short morning, by 11:15 we were at our break stop. today, just soup and lemon tea. At this point we joined the more regular route and started to run into a few more people on their way down the large hill next to the lunch stop. Making my way up it, I regretted the lack of carbs at lunch, something a bit more solid would have sat better. 🙂 In addition, throat was extremely sore, with cold air and coughing, so all in all, not a happy person this afternoon.

At the top of the hill, a rest and a chance for contemplation in a filed of memorials to those who had died in the mountains, many on Everest. 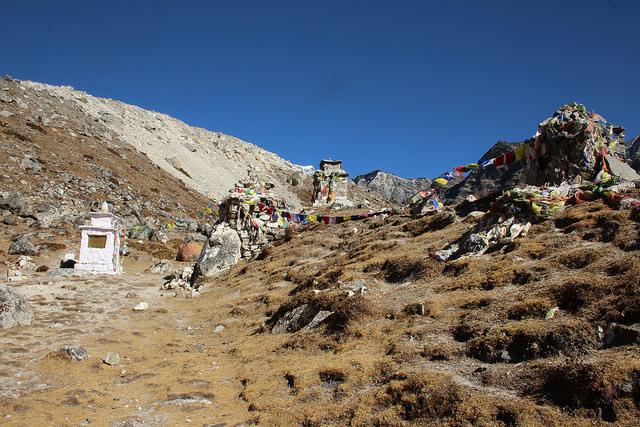 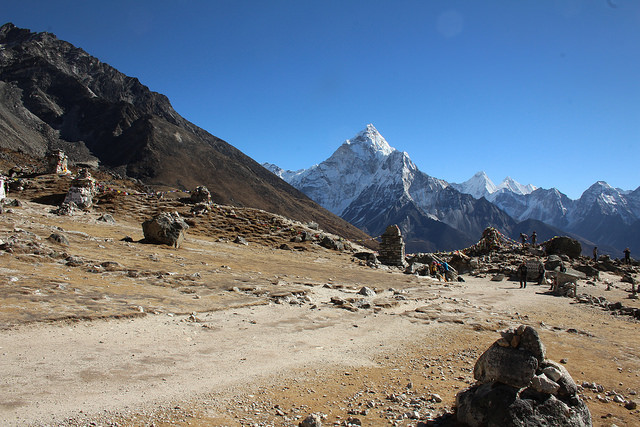 The final stretch was more glacial valleys, relatively steady slopes, far more opportunities to take in the scenery. A few cereal bars had made me feel a lot better and I really enjoyed the atfernoon ‘stroll’ to our lodge at Lobuche, for an early stop around 2:30. Here we had more company than usual; we’d been meeting up with a couple at most of the night stops, but there were a few more here. Lobuche apparently is lodges only, no permanent residents.

The meal menu was the usual, a choice of dal baat, fired potatoes or fried noodles, sherpa stew or the occasional momo. By this point I’d kill for steak and spinach! Today’s stats were HR118 and %O2 86. 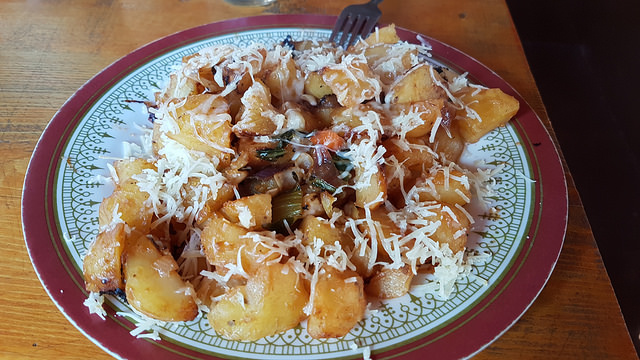