We were nearly there..one more trek. 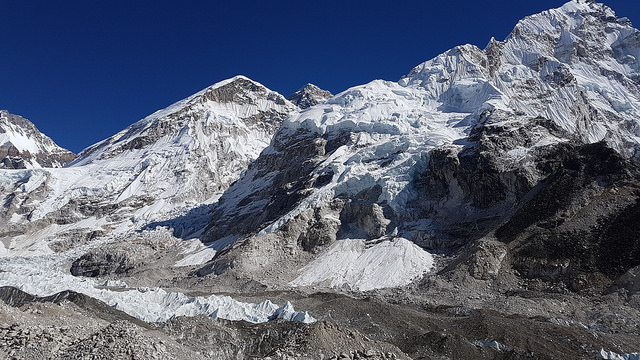 A glimpse of Everest from Base Camp

Today was the big day, our final ‘uphill’ day. We had one of our earliest starts, up at 5:30, out the door at 6:30 as dawn was breaking. Off we went, heading to Gorek Shep; minimal plants, moss and lichens with occasional grass clunps. Glacial moraine, rocks and dirt, and increasingly, ice. There’s a path of sorts, a way though, but it’s ephemeral, disappearing and changing over time. The ground moves and there’s no fixed way. We pass a few coming down the way, on their way back from their trek. Nods and smiles – they’ve achieved their goals, now it’s our turn. 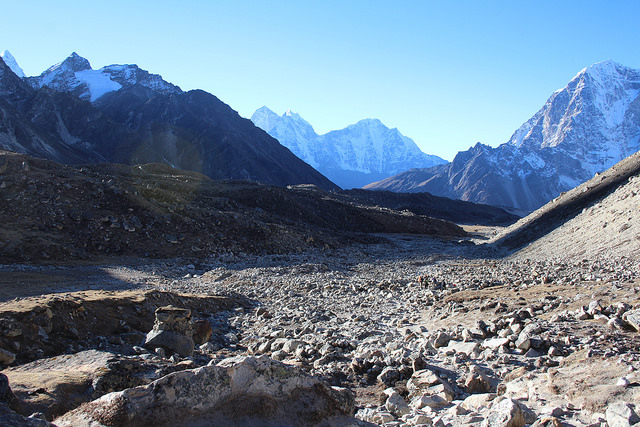 Heading up along the valley

A few hours later we arrived at Gorek Shep, a small cluster of buildings that caters for trekkers. Time for breakfast number 2. Time to leave behind things, only taking the essentials as we head out for the last section, planned between 2-3 hours. 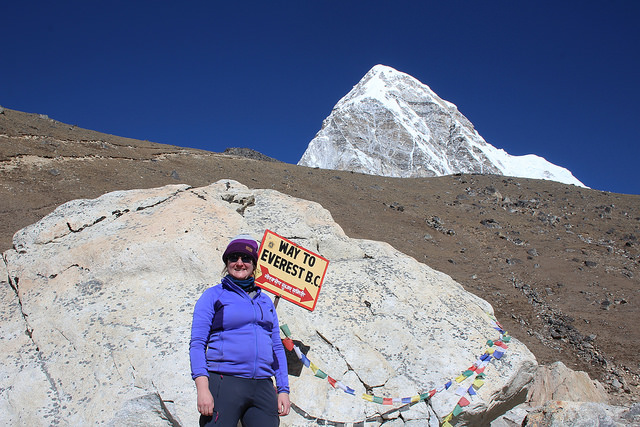 The start is easy, a flat sandy section, then gradually heads up, alongside the glacier, through more rocks and dirt. Up ahead, you can see the target, a bowl of mountains, the end of the valley. 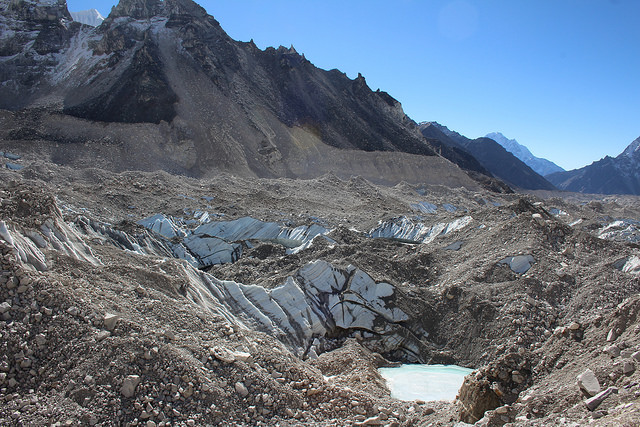 Now down to the glacier, and a warning to make it quick – rock falls are possible, we need to keep an eye out. Across we go, to the ‘photo opportunity’. The cairn that gets built every year for visitors, that gets festooned with flags. We’d made it, we’re at 5,380, a vertical climb of 2.5km since we landed at Lukla 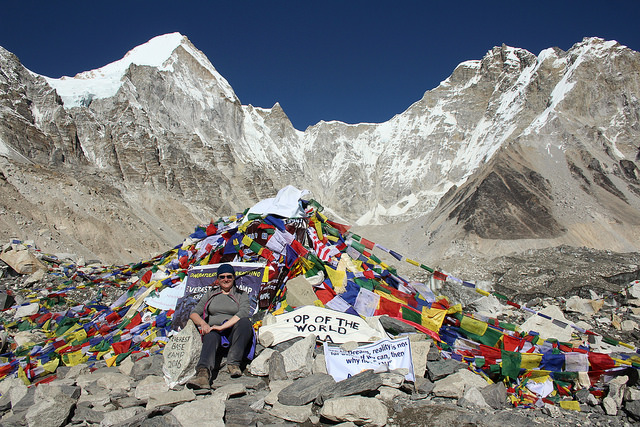 Silence, except for the ice cracking and groaning, the occasional bang as snow and ice break off . The slopes to slip down to the valleys. We’re the only ones there, everyone else had left and our small group had the place to ourselves. Deep blue skies, black and white mountains, the jumble of the Khumba Ice fall as it tumbles down lip of the mountain, and above us, the tip just barely visible, is Everest, tantalising us as it’s done ever since we first glimpsed it on the way up the hill to Namche. You don’t go to Base Camp to take a good look at Everest, you go for the journey and the challenge. Everest is just the beacon that guides you. 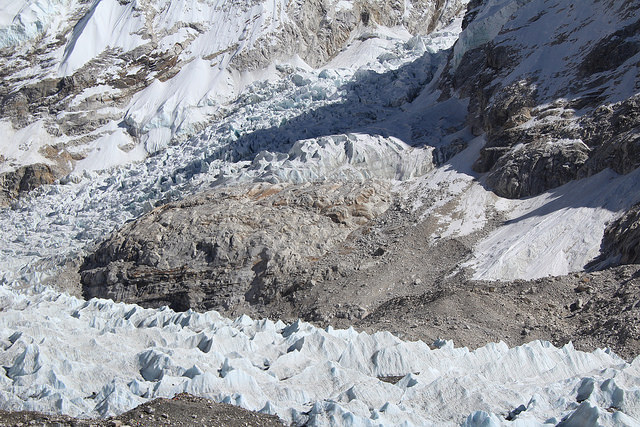 Done, Made it. A quiet sense of achievement. On my first day in the mountains I didn’t think I’d make it, but here I am, goal reached.

So what now? There’s no quick way back, we have to cover all the miles again – at least it’s ‘downhill’!

Back down the valley to be reunited with our gear. Gorek Shep was the most basic of all the lodges we stayed at – and the most expensive. It’s just a few tourist lodges; everything has to be carried up, so things are kept to a minimum and charged for at a premium. We’d were told they’d tried ‘western’ toilets, but they froze too often and cracked..so squat toilets were the only ones available (most of the other lodges we were had got sit on loos, even if no proper flush). But we had food, a bed, and some warmth with the dung fire. One final check of stats – HR106, %O2 83. Looks like my body coped fine this time. Time for bed!