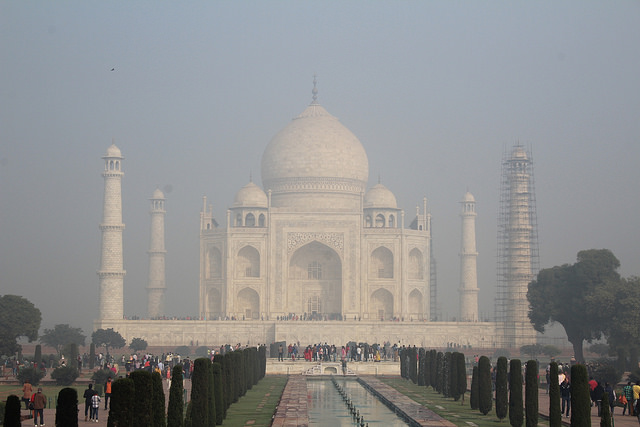 After 6 months of preparing, getting equipment and trying to get fit, my trip to India and Nepal was ready to go. Rubbish was put out, heating turned down, everything washed up and the final elements added to the suitcase. it was time to head off for 3 weeks, my first Christmas and New Year away from the family. The first part of the trip was a few days in India before I headed off to Nepal.

The bag was hurled to work for the last Friday and the hours ticked by through the day. I’d finished off everything and it was only the last bits of admin to do. But finally it was time to head to Heathrow and my plane. A slight anxious moment at checkin, a frown at the screen. Had I failed in my plans? Was my visa OK? But everything was OK, I was away, security, lounge and finally time for boarding. Drinks provided and pyjamas, I was all set for the overnight flight to Delhi.

My journey was set up with Intrepid Travel, so all connections and hotels were arranged through them, starting with airport pickup. After a long flight, I made the mistake of not joining the long queue to pick up currency, it caused issues later when I tried to get cash – India was still suffering from the currency change that had been called and there was little available. Once in the car, we did not go that far, but there were still times I had my eyes closed, lane markings appeared to be advisory only! Definitely not a place I’d be comfortable driving in. Arrived at hotel and my first travel issue. I had no booking. A few phone calls later, nothing found. Eventually, he accepted my paper version of the booking confirmation and cleared it with the company later. One of the reasons i always print out (2) copies of everything when I travel!

The hotel was fairly basic – the travel company was mainly aimed at backpacker types – but it did for the night. A few hours sleep, and then just food and repacking. We had 2 blackouts during the afternoon, with the generator kicking in after a few minutes each time.

The next day, another issue. the hotel wanted cash for the bill (my food). I had no cash. Eventually got them to take card. Luckily, that was the last of any issues, everything else went well. Once that had been sorted out, I met up with my guide for the morning, we were going on a quick tour of Delhi, just a couple of places to get a flavour of the city. 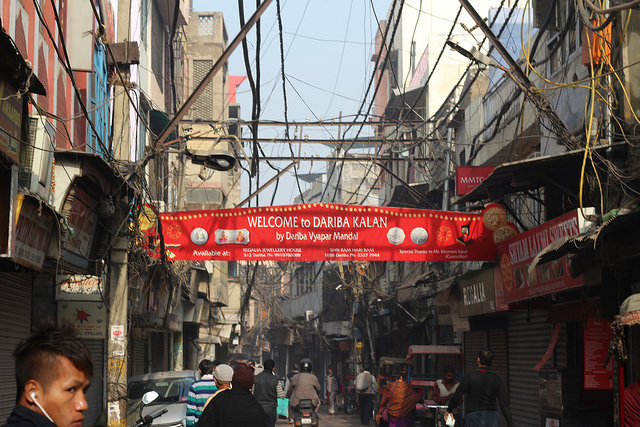 The first stop was the Jama Masjid mosque, built by Shah Jahan (a name I was going to become familiar with over the next 2 days). Apparently the open courtyard can hold 25,000 people! So shoes off, a flowery robe put on and time for a wander and photos. A guess on a clear day you would have a good view over Delhi, but the haze was strong. 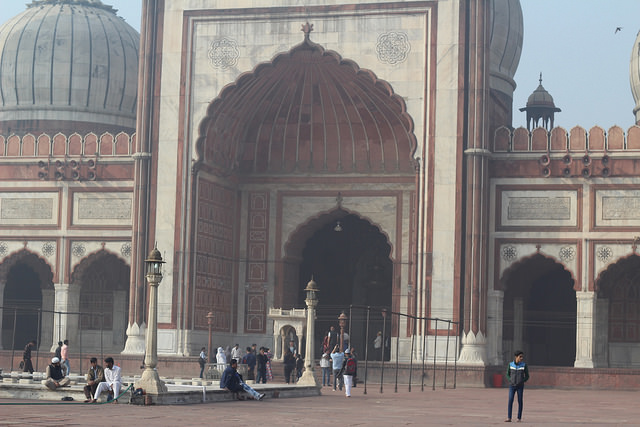 Next on the list was a short walk to a Sikh temple, more shoes off, this time a scarf to cover the forehead/top of head (not just me, the male guide too) 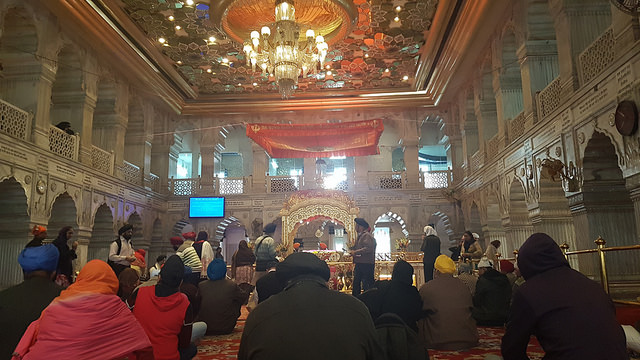 Our final stop of the morning, via pedal rickshaw, was a spice market, apparently an old brothel. Now it has all been converted to shops and houses, even the central square. 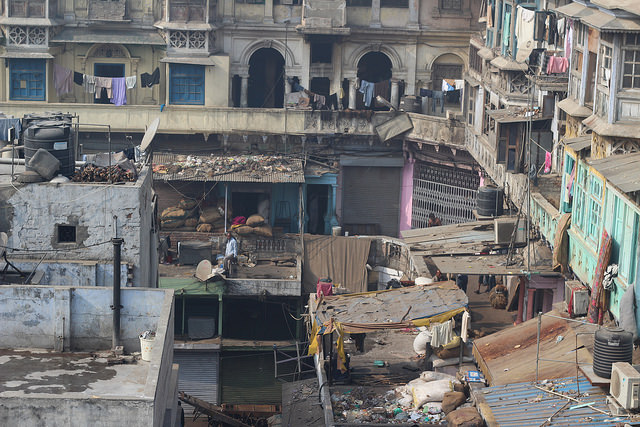 The morning was just a small taste of Delhi, 3 quick stops with very good, knowledgeable guide who had a lot to say about the places we visited and India and Delhi in general. My first impression and definitely culture shock for me; my travels have never taken me to this part of Asia or to any countries like it.

I was handed back to my driver and we headed to the next stop – the long 200 km drive to Agra for the other main attraction on my stay, the Taj Mahah. The main reason for doing this little trip before heading to the Himalayas was to get over jetlag; I reasoned that if I was travelling via Delhi, I should take a look at one of the main attractions.

The driver was excellent through the Delhi streets; I’d (sort of) stopped flinching at every beep of the horn, of which there were many, and I had time to look around me a little more to see the different lives, from upmarket flats to a small spot on the side of the road. Such wide contrasts. Street markets consisting of piles of shoes or clothes or produce with people many deep around the piles. Are there spotters or do people not take things when they easily could? Long stretches of road with clothes hung to dry along the central reservation fence. Once out of the city, the drive was along toll roads, it could have been England – fields, hedges, yellow flowers. A few hours later and we arrived in Agra and I started to my animal count – cows, horses, goats and even camels were seen.

Just a hint of the Taj Mahal, there was heavy haze and there was no clear view. Because of that, it was not going to be a dawn trip, but a more sensible hour of 9:30 pickup. We managed to get there before a main rush; on the way in, we were straight up to the ticket office, by the time we came out, there was a long queue. 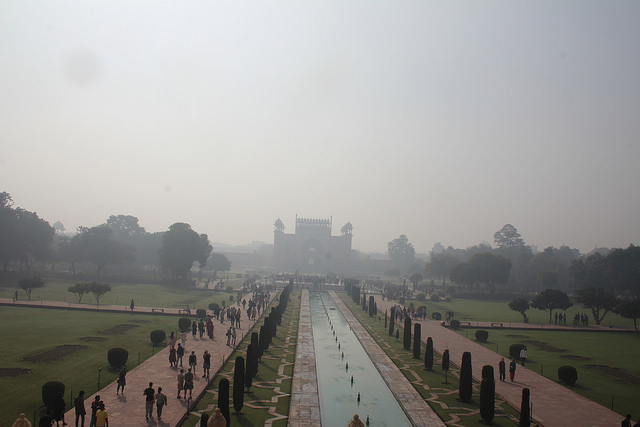 Another great guide, knew all the best places for photos, wanted to make sure I got all the classic views, although was a little surprised I didn’t want my picture on ‘that’ bench along with everyone else. He was good at fending off the ‘official’ photographers and other vendors. 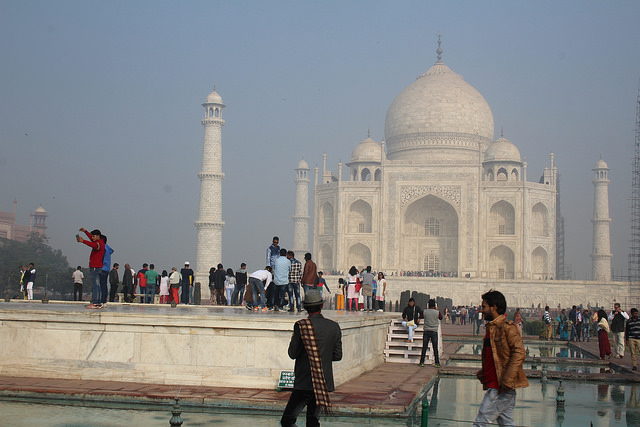 A low walk up the gardens, plenty of photo ops and then up to go inside the building itself. As foreign tourists, we got the cover up booties instead of having to take off shoes to enter the building. Inside was actually a little disappointing; not as much to admire as the actual building itself. Outside definitely better than inside. 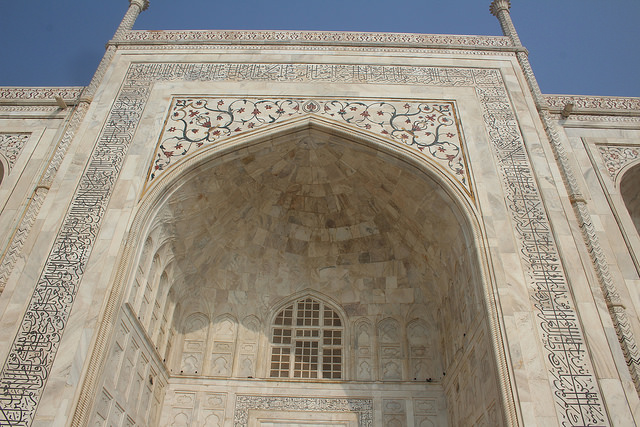 In the afternoon, time for a visit to the Agra Fort, the 3rd building associated with Shah Jahan – he was imprisoned here by his son for 8 years. 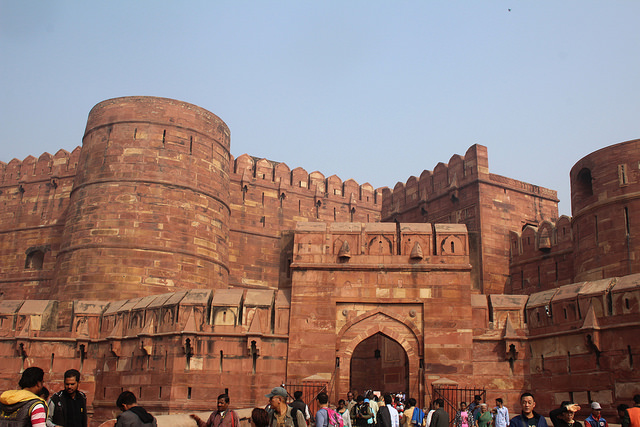 A return now to the hotel for the rest of the day; if I wanted to go and explore, the driver would be available to me. i took that as a strong hint to not to wander around alone. I wasn’t going to do that, i realised I did not know enough about how the country works to be comfortable doing that. Beer and food in the hotel, plus a ring side view of the wedding parade that went by. 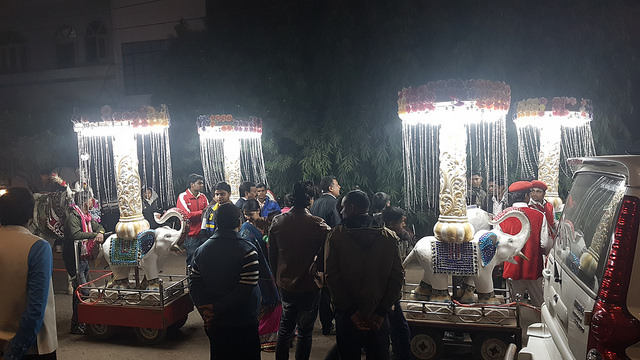 My final day in India was a long travel day. Pick up was at 8; the driver doe this trip between Delhi and Agra all the time, taking groups up and down. He does it 2-3 months at a time and then returns north to see his family for a few months. We first traveled to Fatehpur Sikri, the capital of the Mughal empire from 1571 to 1585 (when it was abandoned due to lack of water). 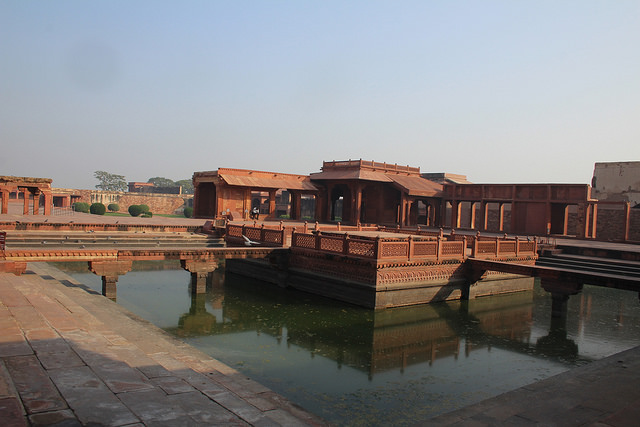 Another new guide to take me around; unfortunately, this one was not that good, i got the key points but that was it. the guides do appear to have a fixed script and tend to want to go through it; this was the least fluid and the least likely to change based on my questions, he stuck to the script.

We parked the car, then got on the bus to the palace. The first of the money transactions took place – the bus, my ticket, the guide ticket at the end, the bus and then the parking. If India is to continue to drive to be a cashless society, as I saw from the press and the large promotion of mobile pay, then it has a long way to go before these transactions get altered. 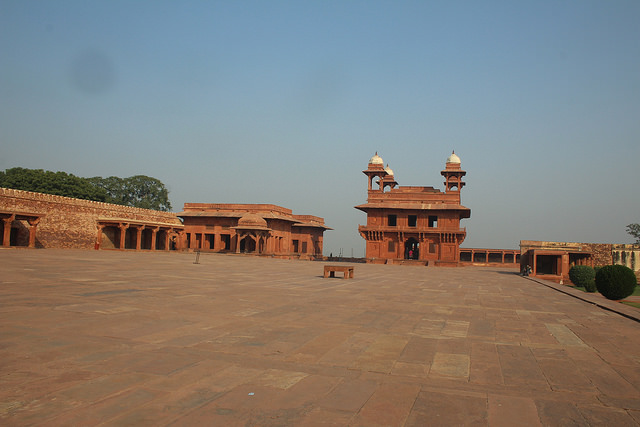 After the palace, the long drive back to Delhi, getting back to the hotel about 4, an hour waiting around and then off to the airport for my flight to Kathmandu. Eventually got into my hotel there at 11:45, tired and ready for bed.

I was not comfortable during my trip to India; I partly expected this from what I knew about the place, a reason I’d never visited before. Too chaotic for me, I prefer a little more order. It’s not on my list of ‘must go back now’, although I’d be open to explore a little more at some point. But even so, I did enjoy the trip and loved what I saw.