Walmart launch a new video download service today. Apparently their development team is browser challenged as they only appear to have IE available to them. Under that app, their site looks, well, not beautiful but at least OK. 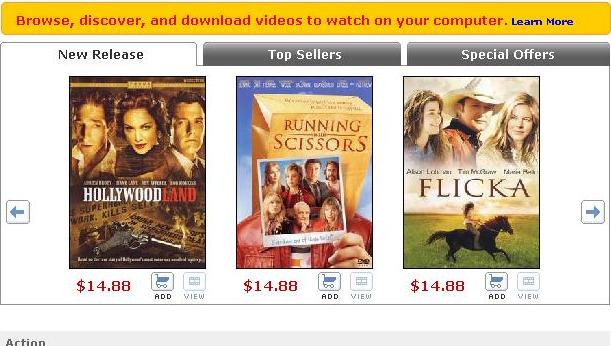 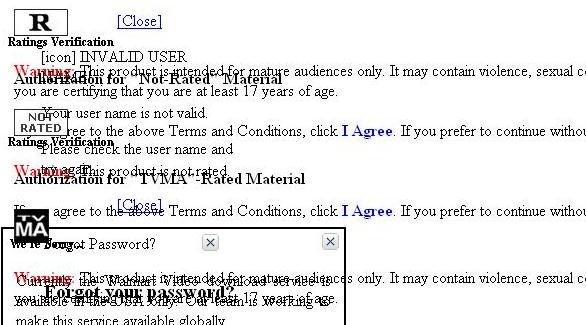 I know that sites sometimes launch without full testing…and that Walmart Video is probably targeted fully at those who have never heard of anyother browser but a token effort to fail gracefully would have been nice. (Tip: Valleywag)

Updated with some traffic figures.

I wonder if this is related to this. Or if the former will cause more of the latter.

Networking sites can change in popularity at a moments notice for a large number of reasons; here, poor technical support and the lack of communication and customer service about the issues seems to have caused rumblings in the communities surrounding youtube and the lack of activity and response to it (in contrast to the behaviour of Flickr) has led to people looking for alternatives.

And then, a couple of days ago, users started making videos about a newly discovered alternative: LiveVideo.com. The response was remarkable. As if scouts had located water in the desert, hundreds of YouTube users went over to LiveVideo and began registering their screen names (many of the most popular were too late and had their names scooped up by opportunists of various stripes) and posting what sounded like liberation videos, singing the praises of LiveVideo’s flawless functionality and hate-free environment.

Now, a few hundred users may be a drop in the ocean, but they could be a core that have driven the success of the site and losing them mean there’s a challenger on it’s way.

Update: Andy emailed me with details of this post on Compete. Google Video and YouTube between them own 51% of the market.

Now, as i saif the YT revolt looks like the drop in the ocean, especially as YT has double the market of it’s nearest rival, but it’s a sign that you can’t keep everyone happy all of the time.

Vidmeter tracks the popular videos across the web, giving you a hourly updated list that reflects what’s hot across 11 sites. You can get a widget that displays the hot stuff on your site as well.

Now what would really help me is if I can take this site and its monitoring and use it for videos that I want to track – let me put in a list of video URLS and track views and comments for me. Even if it can’t do that, it does give me some benchmarks of ‘successful videos’ so I can use for clients.

Sky is bar far the largest purveyor of DVR/time shifting services in the UK. A review of their service released last week shows that they have over 2 million boxes out there, with around 5million people using it – that’s around 8% of the UK population. As a long time user of TiVo, where the programme information is provided by Sky since TiVo left the UK market, I’m a big fan of time- (and place-) shifting when it comes to my entertainment. The time shifting numbers are show what areas are most popular – and there’s no surprise for me that drama is the most recorded and current affairs/news the least

Last weekend I volunteered to have a tivoless weekend as an experiment for weekend. Withdrawal symptoms set in quickly just from the thought of not using, even if I didn’t want to use it there and then. A bad weekend – definitely confirms I won;t go back.

Thanks for Tom for pointing to this. It’s just so cute.

You’ll have most likely seen the SNL Dick in a Box Sketch. And GETV’s response about Boobs in a Box. Now there’s the one sure way to get a man’s attention in the Valley.

A satirical look at what goes on in an ad agency, presenting a pitch to the client and what it really means.

It rings a little true!

from Mashuptown, comes a rant on Pachelbel and how he has ‘ruined’ all sorts of songs since.

Nothing more to say. totally meta. From Consumerist via Ranae.

How many video sites are there now? Plenty, and they are still popping up every week. YouTube is the biggest but Google are still pushing theirs despite buying YT, Microsoft recently launched theirs and Revver is going strong with the shared revenue model. Chris Pirillo takes a look at three key players in this string of videos. The key is to start them all at the same time, starting from the top…and let them interact.

Actually, it does not make too much difference where you start them from as each service has a different load time. YouTube starts quickly and easily, Google goes away and buffers for a while and Revver is the slowest to start by far. Starting them in any order provides these results.

Yes, the writers at Time do know the actual site went live last year. But they are celebrating the sheer power of the people who have made the site their own.

“But even though they built it, they didn’t really understand it. They thought they’d built a useful tool for people to share their travel videos. They thought people might use it to pitch auction items on eBay. They had no idea. They had opened a portal into another dimension.”

They identify three trends that lead to its success:

2. The changes in the web that lets people connect, create and share

3. The cultural shift that means people no-longer care for top-down controlled messages. The removal of the filters is here.

YouTube is ultimately more interesting as a community and a culture, however, than as a cash cow. It’s the fulfillment of the promise that Web 1.0 made 15 years ago. The way blogs made regular folks into journalists, YouTube makes them into celebrities. The real challenge old media face isn’t protecting their precious copyrighted material. It’s figuring out what to do when the rest of us make something better. As Hurley puts it, “How do you stay relevant when people can entertain themselves?” He and his partners may have started YouTube, but the rest of us, in our basements and bedrooms, with our broadband and our webcams, invented it.

So we are all winners here, the people who add the 70k videos a day and the rest of us who watch 100m a day. We are the ones that made the difference.

Lots of stuff on video happening.

DVGuru compares 10 video services. I’m going to have to dig into a lot more of these, as I’ve only used 3 of them.

The US network company ABC have announced that they are goingto be providing programmes via broadband the day after they air, on-demand, streaming and supported by ads that you won’t be able to skip (until someone works out how to skip them). I’m not sure how many programmes they are going to offer – it looks like it is a select few only. The BBC is hopefully going to move out of trials and roll out their on demand service which appears to cover all of their programs, although they are offering certain sports live. And Channel 4 are also dipping their toes inteh water – without the ads (The IT Crowd).

So another option gets added to the mix, and Kevin Marks has summaried the US based offerings. The UK is already offering the ‘cached’ programmes from cable, which pleases a lot of people. No need to remember how to programme the video recorder, just need to remmember which screen the programmes are listed and play. My mother loves it, never misses something she forgot to record.

Also, I guess Tivo is different in the US than how I use it here. I bought a box, paid a one-off payment and just watch all ‘free-to-air’ commerical TV through it. I’m not tied into a cable company. The description meets the Sky Digital + though.