Nice to see that Bloglines is finally back. It was out of action all day, first of all with no feeds present at all and then feeds with no upaftes. It;s slowly coming back to normal but not all there yet. According to their news page, a cache server went down.

The Independent had an article about blogging in China today. I read it and found it quite intersting; later, via Global Voices, I found this commentary and challenge on China Herald. Even taking certain articles with a pinch of salt, i would have generally regarded The Independent as a fairly reliable paper. Obviously, in this case, some things do not appear to have been checked.

Spam trackbacks are annoying; the Blacklist plugin keeps most of them at bay but the odd one creeps through. They’re usually for gambling or mortgage companies. Today I got one about the History of the Ford Bronco (assume a truck or something, not a UK version anyway). Very weird – there’s probably something else in there but I have no intention of looking.

Sarah asked whether we should have a women’s only geek dinner. My immediate reaction to these suggestions is usually no, I tend to react against anything that restricts its audience in any way. For me, I’d ask the question differently – should there be a dinner to encourage a Women in Technology network (and there appears to be a UK section). But should it be restricted to women by design, with women only speakers etc? I wouldn’t like to think so. Otherwise, I support this.

If you took part inthe MIT Blogging survey, then you can access the results here. One of the extremely interesting stats is that 62% of the surveyees to date are female. Given recent debate in the blogosphere about gender, I find this slightly surprising. I’d love to know how the meme spread and the main platforms the bloggers are on – that does not appear to be available in the results.

I would not be surprised if many of the results came from users of online blogging tools, such as Livejournal or Blogger; a quick review of the results from Blogpulse seems to give that indication. the lower barrier of entry to these tools would attract a higher proportion of women than would be found running systems that have to install. Once the meme got loose in this population, it would spread to more women as a consequence of the higher proportions. Hopefully, some kind of analysis of the meme epidemiology could be included in the final results.

Here’s the Blogpulse trend graph showing the spread of the term ‘MIT Weblog Survey’. The track of the term can be found here 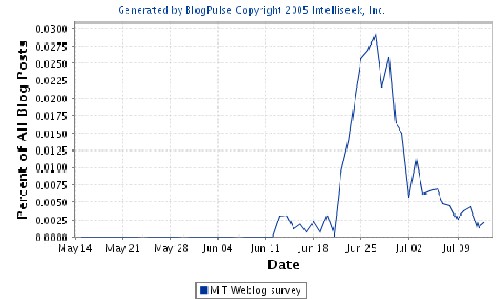 Some preliminary results for the MIT survey have been posted here – or they wil be once the demand issue is sorted out. See what happens when things let loose…

MIT are runnning a survey of bloggers and blogging and are looking for a large sample. If you have a spare 15 mins, here’s the link:

Bloglines has added an Ask Jeeves logo in the top right corner. Unfortunately, everytime I glimpse it out of the corner of my eye, it looks like a snail

On the way in to work this morning, I was considering my first-read feeds, those blogs for which i scan my feed list and read first if I am short of time, like this morning. And then, by co-incidence I find a sort of similar posting here, from Evan Erwin. (via Doc Searls)

In no particular order, what do I read if I have 15 mins in the morning:

I found out today that Jamie Oliver has a blog as part of his brand website (the brand being Jamie). I see some the potential for some great synergy by getting him together with the Chef Neal over at Podchef Show, who puts up Flickr images of the different stages of making his recipes (like this one – mmmm…chocolate).

Then again, every 4th image would most likely be an ad for a certain British Supermarket.

I got a comment from one of the entries to the Contagious Media Showdown.. I haven’t posted it as does very little but link to the site entry. For me this is spam. A more open approach would have bene to get me to go see the site and get me to write about it..(a la Blogebrity). Maybe I will later. But the comment is not being added.

As I, as well as many others, tend to search on peoples names to see what I can find out about them, I thought I’d see where I was last week, based on my full name. On Google, I’m listed at 16, surprisingly I’m number 1 on MSN (but only .com, can’t find me on .co.uk) On the other’s I tried, I was not on the first 5 pages. So I added my name to the metatags. Today, there’s no change on google or MSN, but on altavista and Yahoo I’m now Number 1. Given this, I thought I better put together an About page. Sometime. This week. Perhaps.

I see that Google have now released an Adsense for Feeds. That raises an interesting question for me, after saying that I would rather pay the licence fee for the BBC prgramming than see ads inthe programmes/radio/website. So would I have the same positionwit ads in RSS feeds? I’m not sure. It’s certainly easier to gloss over the ads in the feeds that I read. Doc Searls feed has no content so I switch to the site to read the blog; Slashdot has ads but they are in a different font, layout so I now just skip over them. Will this change as more feeds add ads? They’ll become more intrusive…and we’ll get ways to bypass them.

You know it’s a meme when you see it in 2 unrelated blogs in a row (pixeldiva and Sorority Geek). The musical baton meme is asking about music – the volume of music on computer, last CD bought, song playig right now, sngs you listen to a lot and people to whom you wish to pass the meme.

I signed up to go this Geek Dinner taking place in London in June, as organised by Scoble, Hugh and Lloyd. I’ve watched the numbers grow and the limits increase 3 times, with the total committed now approaching 100 people. That’s a lot of people for a dinner where one of the drivers for people to go is to meet people they know/read only online. So what can be done to share the experience?

Following in Channel 9’s footsteps, I suggest it gets videoed…let’s get a vote about who should star and then get them filmed, in a nice, low-key manner throughout the night in various conversations (can you do low key with a camera?). A good edit later, you have Geek Dinner – the Movie.

I’d offer to do this, but run into 2 key difficulties – no camera and no capability to edit anything, so I may not be the perfect choice for this 😉

Stephen, I don’t mind been sucked up to, even if it is to get a bottle of Scotch 😉

Great to see that IBM have formalised what I see as a very sensible Code of Conduct for all its employee bloggers. Now to start the discussions internally to see if we can move beyond the current ‘do not mention the company at all’ policy we have here.

I received a comment today regarding an older post I made about www.podshows.com. Now, this isn’t Adam Curry’s podshow.com, but a UK based site providing shows by well-known DJs for payment and for free.

Phyllis commented about the commercialisation of ‘casting, whatever the flavour, especially when combined with the government’s agreement that the licence fee may be replaced with a PC fee, perhaps when the current licence agreement stops in 2017. One thing she says is:

I’ve heard it proposed that, as more and more material is going to be delivered via the internet, the licence fee might be replaced with an internet charge. Does this statement mean that this is a move in a direction which would INCLUDE a charge for radio as well as TV? Radio is currently free and do not want to see charges levied via the back door.

I think a saturation point is going to be reached about charging for entertainment. We already pay to receive every TV channel except those on freeview, on top of paying for books, films and music.

Paying for entertainment is not new, and it’s not going to go away. Although we don’t need a TV Licence to listen to Radio, it still funds the BBC stations, as well as funding the 6 BBC freeview channels. For satellite and cable we pay twice, once for the service and again through all the commercials. Even the multitude of free entertainment on the net I pay for – around 4 times the licence fee in connection fees.

But I do hold a different view. I would far rather pay a single licence fee and receive commercial free entertainment than get things “free” and be subject to advertising every 10 minutes. The BBC continue to fulfil their remit towards public broadcasting; such things like the recent announcment of BBC backstage are definitely great ways to use content. When I do watch commercial channels, I watch via Tivo, so if watching “live”, i tend to watch 10-15 minutes behind and forward through the ads. Often, only ads I see are those that are commented on via the web.

If they do charge a PC fee instead of TV fee, then it would not bother me too much (as long as instead rather that as well). However, I understand Phyllis; point – at the moment you do not pay to receive radio. But I do not see all radio being delivered via the internet – anologue is stillthere, digital broadcastng is growing, it’s available over freeview. And although you may not pay a licence for having a radio, if you have a TV, or buy or use anything that has a marketing budget you’re still paying for the service

Last night I went to a Bloggers Bash run by Adriana and Perry, some of the people behind The Big Blog Company and Samizdata. A great night that went on well into the morning. There were lots of new people to meet for me, unfortunately many of whom I only got their first names and never got to working out URLS! (although many do contribute to the previous two blogs.) such as Tom, Brian, Scott, David, Jessica etc etc, But I did work out Elena’s. There were guests from the US, Stephen Green from Vodkapundit and Megan from Asymetrical Information. I’ve posted a picture on Flickr, waiting for the Martinis to be poured.

It’s taken me a week to finally get through all the blog feeds that had built up from my holiday…but finally done. Hooray. All I have to do now is wait another 5 minutes and there’ll be more there.