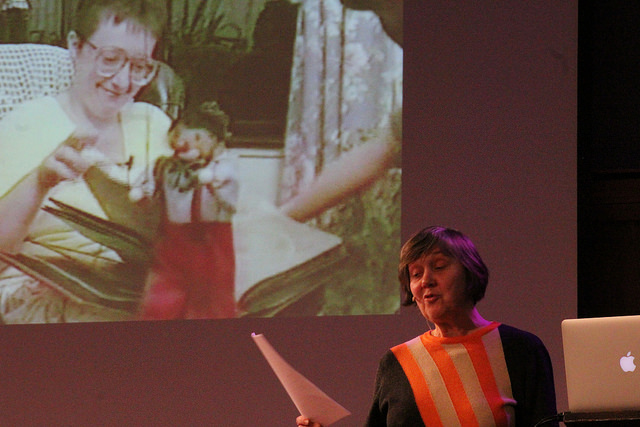 About 25 years ago, she found herself watching a tape that had arrived in the post. There were shots of mirrors around the house. Then colonel Gordon Henshaw started talking..about how mentally you don’t feel older, the mirrors show you the reality of time

He would have been the last person you would go to…and wouldn’t necessary ask the question. but in his home with his own camera, he was great.

This was the first of Video Nation. 2 min stories at 10:29, just before Newsnight. Before youtube, something not seen much before.

Gordon was one of 55 people who had been given cameras a year before and asked them to record everyday life. it came from a bbc team, to open up public space and get people to tell own stories on their own terms.

They had been experimenting with camcorders with video diaries..15 mins programmes. this was intimate, brought a sense of place, a breath of fresh air instead of what was seen as documentaries then

Video Nation developed this, a group of people around the UK to record over time

Mandy had found the traditional docu making process problematic, using someone’s story for own project. She had found herself on arts programmes, the Late Show. less ethically problematic for her. She saw an advert that married video diaries and the mass observation project. this had 2 aspects..the traditional anthropological study of UK life…oxbridge went to live in Bolton to look at locals. the other aspect, a national panel was established, to write diaries about their own lives.

It owed as much to surealism as it did to journalism, as their manifesto illustrated. eg shots and gestures of motorists, the football pools, bare armpits and eyebrows.

Mass observation offered an alternative approach to docs. They started with an intriguing challenge..how to get a group of people to record everyday life. They visited the mass observation archives to get ideas.

They puzzled how to reflect it in a group of 50 people they may not be accurate in a scientific way. but they had a model to represent diversity, to reflect what was really out there. 50% women, 20% over 60, a wide range of political views, a wide range of incomes (split into 20% cohorts), and different communities

The stories were about family life, about identity, about being others, when it came to migrants.

As the tapes bagan to arrive, (they were sent in the post). it became clear the project was tapping into a rich seam, you would never know what would appear next. they refused to conform to expectations. the emotional world was rich, full of details, often tender. they were often in the home (where people felt comfortable).

It was not just handing over cameras. training was key, showed people different ways to record them self. straight to camera, behind the camera, the handheld selfie’. They encouraged people to say things aloud, to articulate values, to reflect their world, when things both good and bad, when things were on their life.

The bbc edited, the people had the right of veto. and this was critical, as people were free with what was recorded as they knew that they could see the final version and could say no (the lawyers were not originally happy with this, but it was a good thing)

Mostly it was pretty banal..occasionally things were more serious (eg something about northern ireland)

Shorts was not something the audience were that comfortable with…the call log was interested, people called up what aws the point of the programmes, were they supposed to real.

The BBC needed to find ways of reflecting the wide range of people that were out there, and this was one of the ways this was done. over time the calls stopped, the audience started to accept the form. they were seeing how there were many different views, how they reflected the people and finding out how complicated people are.

They got films they would never had asked for (eg lady with pregnancy bump) You look on yt and there are many similar videos now, (the woman at about 39 weeks) but they’re not on bbc2

Many people watched shorts, could get an audience of 5m, people never knew what they were going to get. they paid attention. people often spokes about them

When she was asked about them, she described the whole process,and she felt the interest drain away, it was though this took away the magic if the films the collaboration was not a compromise but the best way to get the story

The participants were in control of their agenda…they developed that opportunity over time, to understand how to use it

Video Nation’s success was about the balance between the edit team and the subjects, a co creation.