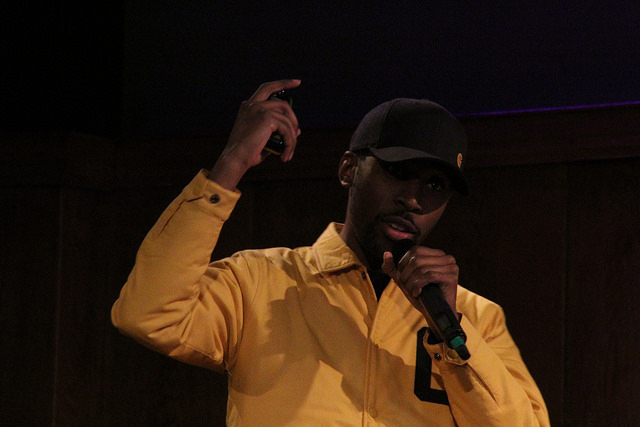 Elijah at The Story

Elijah (and on twitter) talked about his history with Grime music and culture from London pirate radio in early 2000s.

Jamaican parents, born in Hackney, lived there all life. Got involved in music in late teens, eg in Notting hill carnival 1994. The sound developed, reggae, jungle, garage through to grime

He listened to pirate radio, and did not realise that not everyone had the same experience; he thought the radio was the radio, music is music, grew up listening too all types of local music. It was something he wanted to do that..but was at school and was being pushed toward an education – get exams, get a job, make money, make family proud. The push was not to be the guy that left behind…but he still loved music.

He got his a-levels, then studied business (to be employable). Lots of people he was listening too were selling own records..making music in house, sell locally, plough money back into the making. He was not ready to go to his mom and say he was going to be a grime dj..so off he went to Uni in Hertfordshire. It was a shock, he was not used to it being that quiet! There, he met a music partner and started to work with him. A year into degree, started on Rinse FM, a pirate station, hidden away. The first time he went, there was no one there..got to play for ages. Asked for feedback, he was just asked to come back (nothing else!)

He graduated in 2009, but the crash happened. He interviewed a lot and no one had anything; he was being told he was not fit for anything. So in end 2010, decided to take the music seriously, to be independent on his creativity. So he moved from asking for things and asking for permission to just doing things. And then people started to ask things from him. the moment he decided he was not going to look for a job and he stated he was going to make music and he had a label…so people started asking him stuff. His first album was 200 quid cheaper to do in 2 colours, that’s why black and yellow in his label colours.

He has never been in the charts, or ‘blown up’ (something he could tell his grandmas, for them to understand what he does) but has had freedom of creation, and chances to travel etc. Far better than what he expected, entering a the office job treadmill

Even though he does something niche, he wants to show it is good, he wants to get niche ideas in front as many possible..so he put his label logo up in shopping malls etc, he just put his stuff out there. Don’t have staff, interns etc, just learning things as they go. It was comfortable, doing things he wanted. Grime particularly gave them a blank canvas, there were no rules..they were forming them as they went.

Does not take for granted his living in london…he may not have lots of privileges, but still many than most places, the freedom of speech should not be take for granted.

You hear the phrase ‘bring people though’ a lot in grime..getting people into the scene, giving back to the community, share info, share with other people. help people make deals etc. He’s now doing a lot of that.