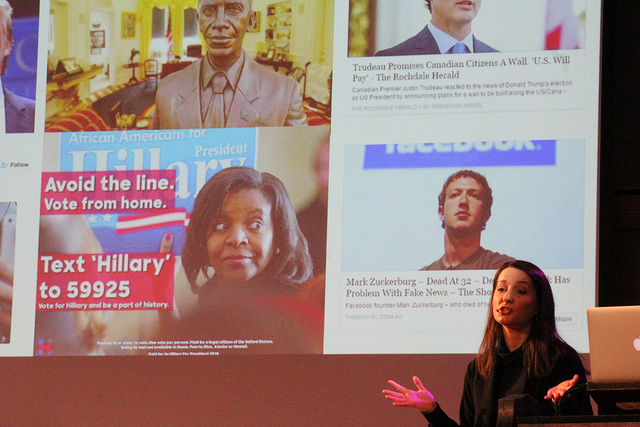 Lisa-Maria Neudert works at the Oxford Internet Institute, researching how algorithms are being used to manipulate public opinion. about how we as a society are having public conversations and how we are participating in public life

So this is about conversational propaganda. Starts with where are you in moments..eg Brexit and Trump

They are investigating whether what had influence on these, eg Russian propaganda. Not sure yet, but there is definitely an impact from online life. It is global, high impact and very real time..through the web, with your newsfeed tailored to your choices. The shared experience is getting lost. There is increasing talk about polarisation, about echo chambers, the loss of journalist gatekeepers.

We are living in an info rich environment, something that we have not done before, when there is so much content to pick and choose from. and how do we navigate? Attention is highly valued and sought after. How do you grab this as a politician? So we have seen attention hacking…computational propaganda

Story 1. Macedonian teens who figured that fake pro-Trump stories were things that people clicked on. so they set them up and waited for ad dollars to roll in

Bots amplify topics…also with micro targeting, political marketing and advertising to find the people interested. The problem = propaganda has changed. Propaganda is not new, but how it is created and used is. Propaganda started with Alexander the Great = he had storytellers telling about his deeds. But now the channels and forms have changed and increased. We are in the next evolution, making it more powerful and impactful.

At the core you still have manipulation – emotional. what is different know is the methods. It is data driven; it has access to the user data you volunteer as you use the web. Automation both for creation and distribution enables scale. It has never been as low cost to disseminate the message to the wider audience. You have take it out of big tv ads etc to social, where it is low cost. The media is more than a natural evolution. Social media has shifted and provided opportunities to easily get content to users. It has never been so easy to make videos and sites that look professional. Look at the pro-gun bots that flooded about the Parkland shooting, they were pro-gun, pro russia..eg that is was the lone wolf.

The mainstream phenomenon – the politics of post truth that is about playing around with narratives, pushing stuff that is not true as truth. trump on a daily basis, brexit. See it across Europe. It has become political mainstream. facts are being twisted to the agenda

So do facts matter any longer? Yes, they are important, but it gets harder to distinguish what is a fact..the politician not using them as much, the platforms not acknowledging that they have a problem in sharing things. Also citizens not being able to distinguish. WEF asked about trustworthiness of media..70 % of people said they had difficult to distinguish truth from falsehoods on social media

Her phd is looking at trying to find info…her training would be to gather lots of data about this. but it is difficult, as the platforms won’t share. The platforms that were being challenged to provide the information..as a researcher, she could not get access as not in the groups and the platforms not sharing with researchers

One area of focus has been junk news in elections (US, FR, DE, UK). Looking at sources that people were using. Looking at 30 million feeds and what was shared. Looked at the sources. Big 2 categories, the professional news sources (BBC, CNN, from parties, from candidates). On the other hand junk news. (ie fake news, but can’t use that term due to devaluation of it). this is conspiratorial, biased, non factual. So how much of the latter was being shared..so what were the proportions

So US is far more using junk news…UK/DE still quite high, but nowhere near the US.

Who was the target of propaganda?

They looked to see if swing states were targeted? They were sharing the largest amounts of junk information. They were being highly targeted. It is more than the internal society, it is targeted, from somewhere outside. Other areas – blacklivesmatter, gay/lesbian communities, veterans orgs. all targeted – they people who were unhappy with the political situation…tailored for them

‘Destroying the field’ is the technique…it is not so much about a specific agenda, it is about sowing dissent, confusion, making people feel happy in their everyday life

We are shedding light on a couple of things seen, only focused on a couple of networks, but there is so much more to focus on. there are more than political bodies, there are big corporates etc.

Public discourse is at risk.

The junk news is scaleable, immediate, personal. And it leads to the next dangerous element – solutionalism. (something must be done)
That can impact freedom of speech.