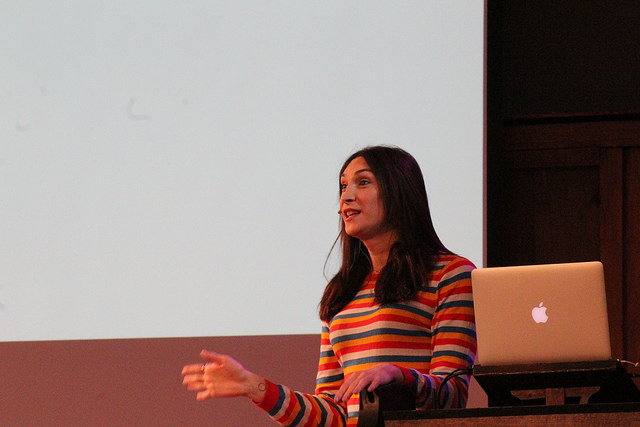 This talk may not be fully on brief… it’s about the side hustle of being a story teller. She is a storyteller first, and everything else second. but there is always the side hustle.

She got into writing a weird way; she was a primary school teacher in Brighton.. she was borrowing the books from her kids. There was a book with an apple on the front that a lot of girls were reading – it was Twilight, started borrowing more, it was felt to be a golden age – eg hunger games etc… started realising these books had everything. She had been a big fan of high school movie and these books were the equivalent.

But she didn’t recognise herself, the characters were very middle class, white, straight, cisgender etc so she decided to have a go at writing her own. Her friends were dubious…she started out on her own experience, about Pendle and growing up there. Took her and her 3 best friends and put them in the plot (it became Hollow Pike). She made goals along the way – sent chapters to friend, who was asking always what was next. then it was a challenge to finish it – that would be an achievement. She also used it as a hobby to keep herself busy…to prevent her cheating on her boyfriend, who was away a lot 🙂 (lots of laughter)

She sent it to an agent. The agent said it wasn’t ready…bu there was something there, so get it finished. Eventually she got it finished an get it accepted. She caught the tail end of big boom on teen fiction (not as easy now). she had her agent, and as her side hustle (the writing) was becoming the hustle..and teaching became less important… When she had a deal she left (she felt it was not fair on her kids as she was not focused on it)

It then stopped being fun..it was the job. Her second book was not easy, the sequel to Hollow Pike. Then the 1st book was not selling well, so asked to bench the sequel (after 1 week of sales)…it felt like she had failed, she could not talk to people.

Her advance did not go as far as she thought it would do. The agent got some, it came in chunks, the taxman got it, She had quit her job, moved to London and her money was dwindling really quick. So what could she do? Go back to teaching..so everyone would see she had failed.

She decided now she needed a side hustle. so that was the Carrie Bradshaw model..a freelance journalist. She had just read Caitlin Moran and recognised that non-fiction could have a character.

Had recognised that sex ed is often very badly done..down to good staff, not consistent. and LGBT is really poor. Teahcers don’t really know what they are meant to be talking about

So she proposed writing a non fiction book – and she knew she could sell the pitch rather than the manuscript. So she had a new book deal…a small advance for ‘Being a Boy’. It sold well and the publisher asked her to write ‘Being a Gay’ But she could not write this; however, inspiration struck and she decided to call it ‘This book is gay‘ (after lots of telling kids should not use this form a lot at school!)

The publisher agreed..she would also interview lots of people of different types. Through this process, she recognised that she herself was trans. The book has just been published in its 22nd language. Has lots of good feedback about it.

The reason she is still here, writing full time and speaking, the side hustle of writing non fcition has become more lucrative.

Storytelling and novel writing is now a lovely hobby again. fiction writing brings her the greatest satisfaction. The pressure has been removed and she does not have to churn out fiction, so not reliant on the advance checks. She has time to breath. Thinks her next novel is one of her best works.. it was fun to write, wrote last summer over 3 months, character just came to her. She was supposed to be writing The Gender Games…but the story was demanding to be told.

The reviews have started to come in and they have been glowing, she thinks the readers can tell how much she enjoyed writing it.

And the reason she can do that is the hustle of non-fiction…she’s just had her first commission from Cosmo.. now shes back to where she was in 2010…really enjoying the storytelling.