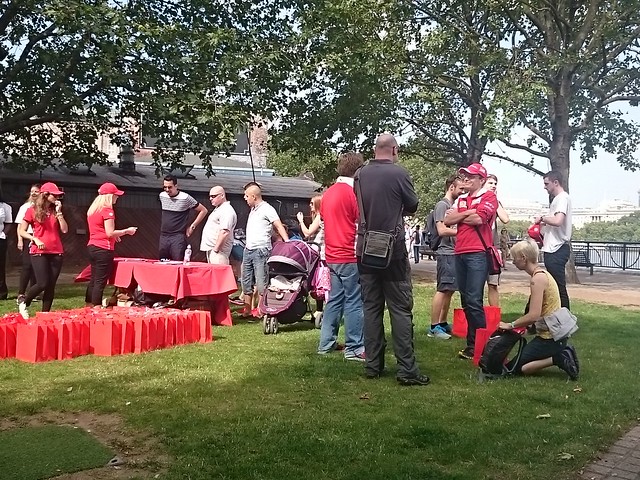 It was a lovely day in London yesterday. It was made even better by Shell who ran an event – follow the clues, find the Ferrari, answer a question and see if you’re quick enough to get there first and win a trip to the Belgian GP. If you follow me on Twitter, you’ll have noticed that I was fast enough and I did win 🙂

Shell are a long term sponsor of motorsport, with their partnership with Ferrari being one of the more longstanding ones in Formula 1. They also sponsor the Belgian GP, so they tend to do a lot of hospitality at the race, I heard the number of 800 people who would be guests over the weekend. And 1 of them will be me this year, along with the other winner of the day, our friends plus the winners of the other events.

The competition started off with having to register for the event, they then invited 70 people to the actual hunt, starting off on the Southbank. A surprising number of people did not turn up for this – i reckon there was only about 30, so the odds improved immediately. This is always an issue when running promotions like this, getting the people to actually enter and take part – but if you don#t take part, then you have no chance. As i looked around at the people gathered, I was trying to assess my chances. At this point, we had no idea what the form of the treasure hunt would take. Would we need to jum on and off tubes? How hard would the questions be? Just what were the rules going to be. I was expected to have to do some running – I came prepped with trainers – but not sure how much. There were definitely some speedy looking people standing around, I was not expecting to be able to win a footrace.

The briefing went through the rules. We were going to get the clues via DM, we had to make our way to each of the checkpoints, take a selfie, with the info, and tweet them, in the right order. At the end, we’d find a Ferrari California T and if we answered a question right, the prize was a VIP trip to the Belgian GP. The prize was only for the first 2 people to make it though, both to win a pair of tickets. It was clear that we could take whatever form of transport we wanted to get to all the locations. 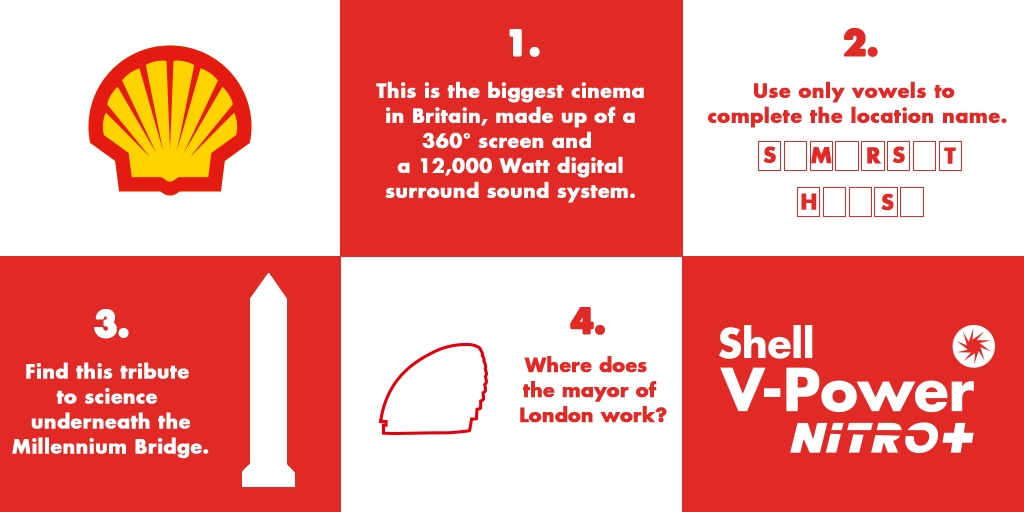 The clues were delivered, the countdown happened and we were off!!! I went off at a steady jog, first stop the Imax. quite a few in front in me but as I got close, for some reason quite a few seemed to be going the wrong way, I stuck to my plan and got the first image. Next stop, Somerset House. Up to Waterloo Bridge, taking the decision to run instead of catch bus or cab at this point. Found the next checkpoint on the Strand, repeat the selfie taking and then switch transport mode. 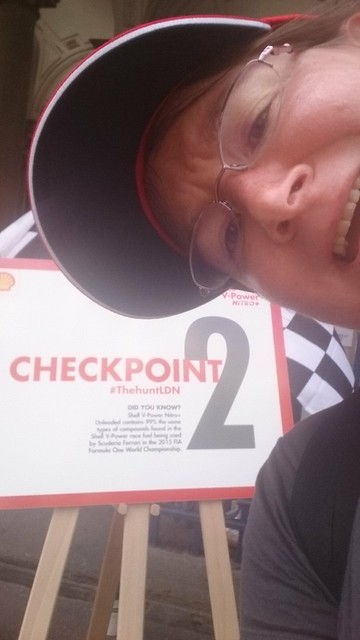 Living in London and knowing this particular area well, I knew it was a bit of distance to the next 2 checkpoints, time to take a cab! Not quite sure what the cab driver made of me out of breath..but he got to the Millennium Bridge as fast as he could for check point 3. Then another cab, luckily there was one right there. As I got next to the City Hall, I saw two people running ahead of me, so I jumped out the cab and dashed after them!. I had no idea if I was any where near the front but I kept going to see the Ferrari finally set out on the grass, with people waving checquered flags and the car surrounded by security. 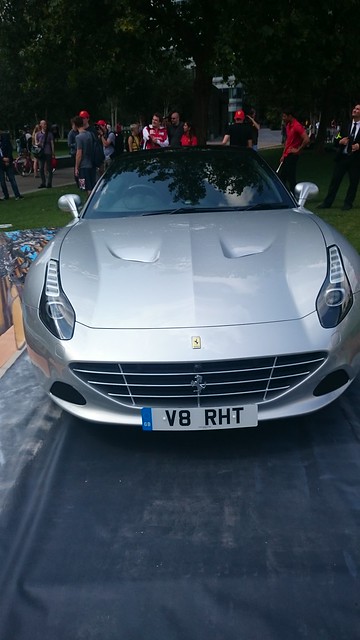 A quick check that I’d done all the tweets then time to try and answer the final question. We’d been told to read all the checkpoints trivia, but the answer turned out not to be there, but right in front of me! It took my 3 tweets to actually get the right answer and all the time I was waiting for them to call another name to go with Jon, who was there first and had already got his prize. But yes, mine was the name they called out next and I HAD WON!!! WOOT!!! 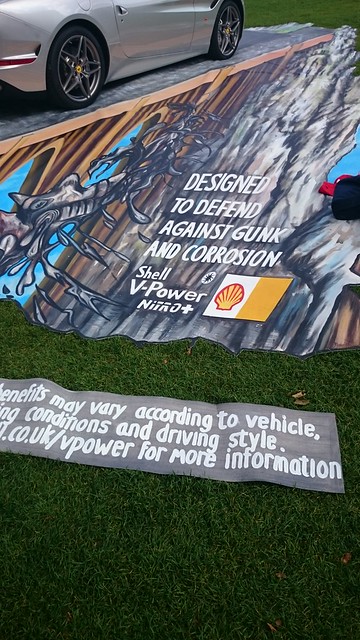 I had so much adrenaline that I was still shaking 15mins later. We had to do a number of retakes but the film, as us winners had beaten the camera team to the final checkpoint, so we did a few more run ins and car openings. Then it was off to the pub where the Shell team had got food ad drink awaiting – plus everyone got fuel vouchers as well.

The was a final little bonus – a ride in the Ferrari. First time in a Ferrari – and it’s not often i get to sit in a car that cost more than my flat did! 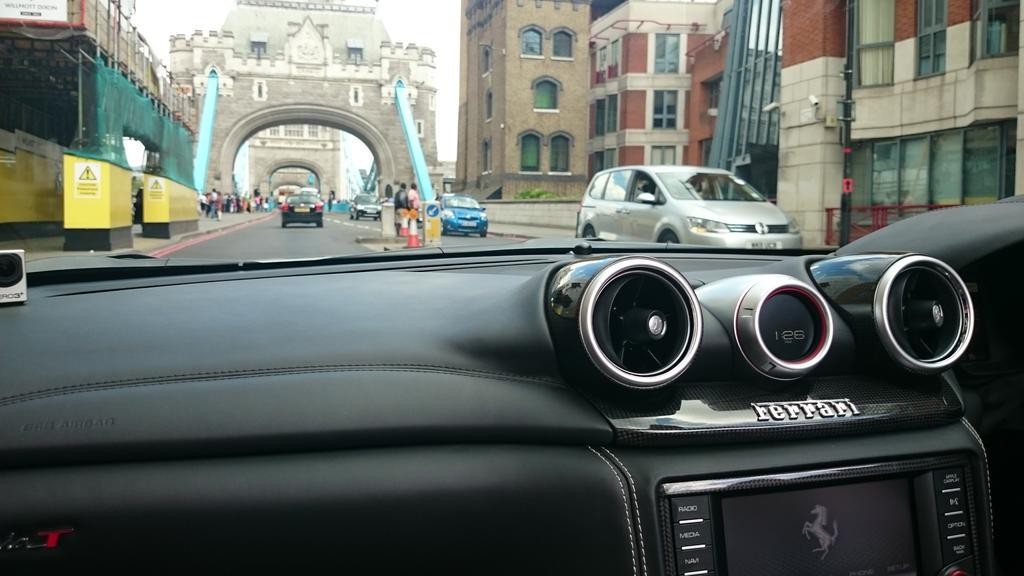 One thought on “The Hunt by Shell Motorsport”