In the previous post, you’ll have read that I managed to win a lovely VIP trip to the Belgian GP, through a competition organised by Shell Motorsports. Finally, after a few email exchanges, that the day arrived and we were off to SPA.

Sofia and I were travelling by Eurostar, as were a number of others, both competition winners and journalists/bloggers. From Brussels train station, 7 of us piled into a cab for the hour’s trip to Maastricht, for our hotel. This in itself was about an hour from Spa – as the track is in the middle of the Ardennes forest, there is not exactly a lot of accommodation around and many people camp, or do a long trip to the track everyday. 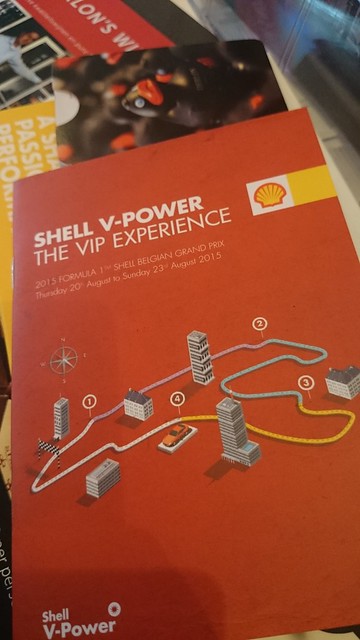 Once at the hotel, checked in, we got the all important timetable – and tickets! The precious tickets, 3 days grandstand and access to the Shell Hospitality Suite at the bottom of Eau Rouge. But before we would do any of that, our first treat of the weekend, dinner with the Ferrari reserve driver, Estaban Gutierrez. There was no time in his schedule to get all the way out to us, so we were bundled into a coach and heading to Spa, to a small place called Roannay just by the track. It is apparently the place where Bernie Ecclestone stays, which is why it must be one of the very few rural hotels with a helipad out the back. 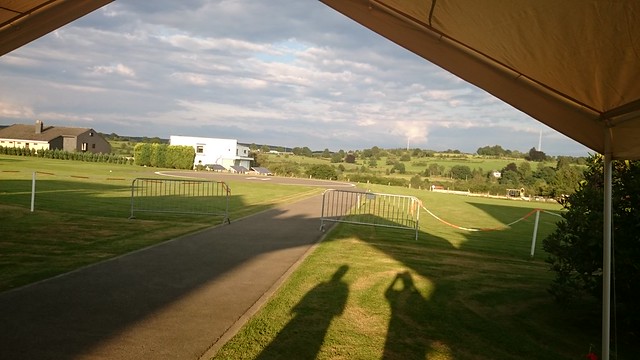 Our guest arrived, only a little late, and the photocall was done. Then dinner, and Estaban joined a couple of the tables for a chat, along with some of the Shell fuel experts to chat about how they develop the fuel for the teams. 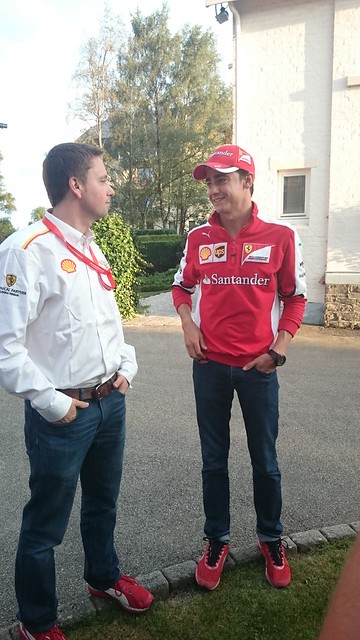 As with all aspects of a Formula 1 team, the development of fuels is a continuous battle, always looking for ways to eek out more power and more efficiency. This year alone, they have managed to find an extra 5HP through development. I asked our Shell expert if the fuel and the engine were co-developed, if they had ever suggested an engine tweek because of a fuel improvement. The answer, surprisingly was yes, it can happen that way and when it does, all improvements are considered. As expected, we also spent quite a bit of time chatting about Shell V-Power and how the race team fuel development has inputted into the road car fuel. Another interesting fact about that is that V-Power is now often used for racing cars themselves (club racing etc) as it works as well as the specialist fuel but is a lot cheaper! The dinner over, we headed back, one last drink taken in the lovely warm evening in the square.

Friday dawned bright and sunny. Yes, sunny,, hot, completely weird weather for Spa which is traditionally a bit wet. Back on the coach and we were finally headed to the circuit. Quite a few people in the group had never been to Spa (in fact for some, this was their first race) and it was great to see their reaction when they turned the corner to see Eau Rouge for the first time. Our home for the weekend was the Shell Hospitality Suite which is at the bottom of the Eau Rouge hill. Just up from it is our grandstand – which provides us with a glorious view! 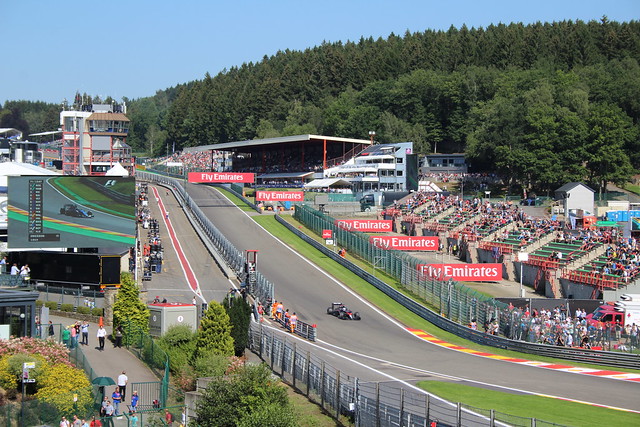 Before I got the chance to sit there for a while. we were first up for a whistlestop paddock visit to take a look at the Shell touring laboratory. We learnt about the fuel checking, taking samples every single time it moves containers and continuously checking them for consistency. Anything out of the ordinary, something as simple as contamination from a glove, can mean that the fuel no longer matches the reference sample and is therefor ‘illegal’. On the Helix oil side, checks are run that allow early signs of engine trouble to be detected. Anything strange in those samples can mean that a bit of the engine may be starting to break down – and the oil analysis can pick things up before anyone else. 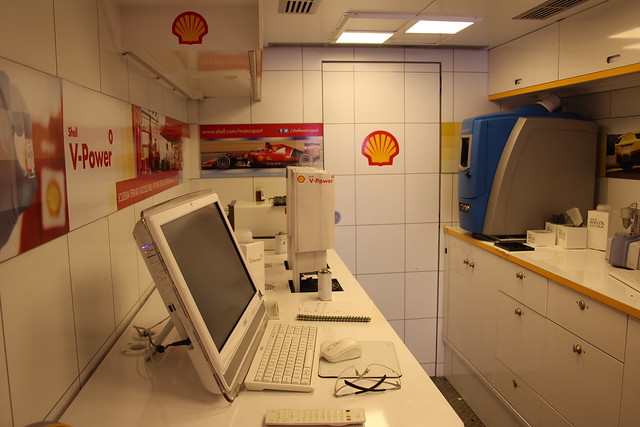 We also got to see Maldonaldo back in the paddock after his FP1 crash! Unfortunately, no garage tour though. 🙁 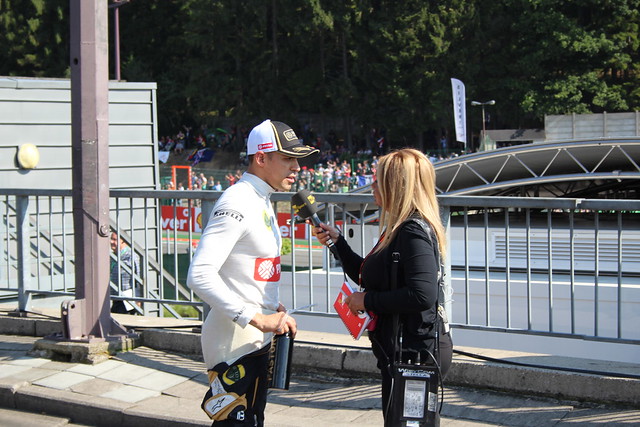 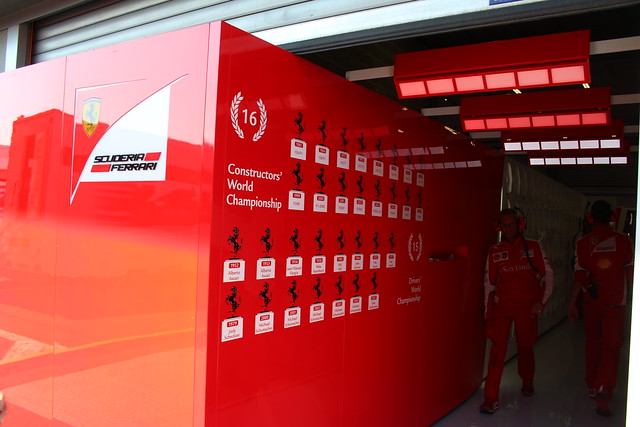 The rest of my day was mainly spent watching cars. Which means I missed the visit from David Croft from Sky who came down to chat with the group – I was watching GP2. I did get to listen to Marc Gene at the end of the day though, when the group was invited to ask him questions about his career, the cars and how Shell helps them. He’s the one that mentioned the improvement that can be seen this year in the fuel and how it does get noticed in the car; he also chatted about how the whole system is getting more efficient, with fuell use now down to about 2.5 litres a lap (average over tracks) whereas before the recent changes, it was about 3ltrs. 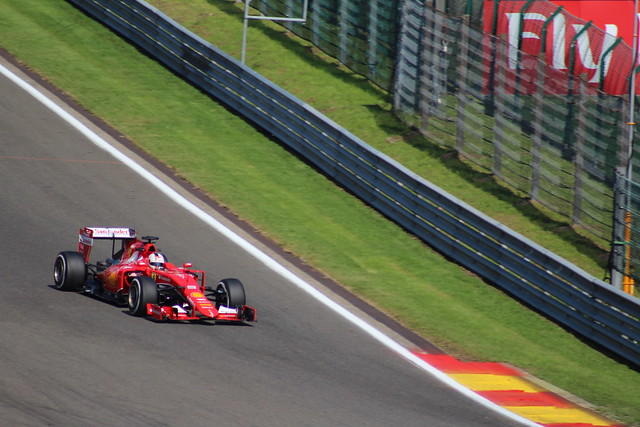