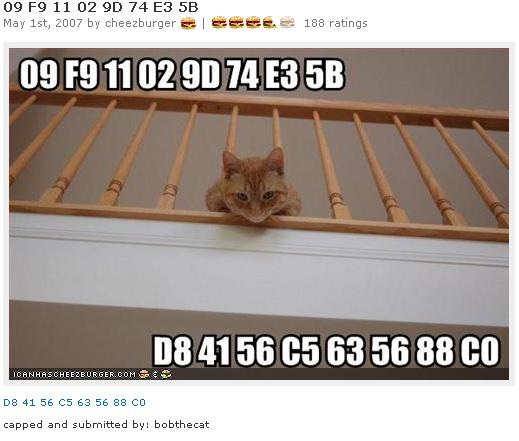 I was going to write a post explaining the background to this, but Ethan has done a brilliant job doing just so and it’s pointless to repeat why this number has raised such passions.

For much of yesterday, almost the whole of the front page of Digg was related to the HD-DVD story, triggered by the numerous cease and desist notices. Digg appears to have calmed down now, no doubt helped by Kevin Rose’s acknowledgement of what his users were telling him, that bowing down to pressure about this issue would not be tolerated. On his last post, sitting at nearly 30k Diggs, he said the following:

But now, after seeing hundreds of stories and reading thousands of comments, you’ve made it clear. You’d rather see Digg go down fighting than bow down to a bigger company. We hear you, and effective immediately we won’t delete stories or comments containing the code and will deal with whatever the consequences might be.

If we lose, then what the hell, at least we died trying.

The page is sort of back to normal, although the top 10 story listings this morning carry their own tale. 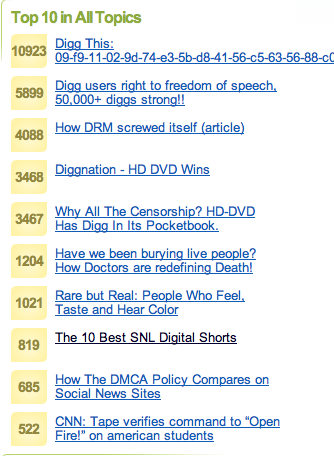 Meanwhile, the number of posts and sites containing the number currently site at around 60k on Google (or 300k without dashes or quotes). The cat is so out of the bag. The AACS site explains that they withdrew a key for some devices, which I think is this one? However, the whole furore demonstrates the futility of relying on security where the lock and the key have to be in the same device. It will get cracked and it’s an arms race in which there are far more people on the cracking side. The music industry are already travelling this road, are the film industry going to end up in anywhere different?

A recent study by the BBC Trust into its intention to offer video on demand concluded that:

When it came to video content, the situation was far more complex. Although no specific question addressed it, the Trust came away with the impression that, while industry considered DRM a given, the vast majority of the public was opposed to it.

Don’t restrict where i can play my DVDs. Don’t force me to buy only one operating systems. Let me choose where and when I watch things that I have bought!

PS: I know sometimes reporters get things wrong, but this story on MSNBC (apparently from the FT) seems to be from a none-existent timezone.

On Thursday, Kevin Rose, Digg’s founder, reversed course and said the company would no longer delete articles featuring the encryption key, even though that might lead to the site being shut down by lawsuits.

2 thoughts on “The cats are in on it”