If you want to protest against the Flickr changes, it appears the best way to do so is to KEEP PAYING THE SUBSCRIPTION!

Somewhere in Yahoo!, there’s a spreadsheet. On it, there’s a financial model for Flickr. Bought by Yahoo all those years ago, left in a corner with only the occasional bit of love, Flickr was one of the originals, one of the few where you could pay for a service. But it was never really upgraded. Until now.

Now, someone has tweaked the model, looked at the projected lines and decided something. They’ve decided the subscription service is costing them money. That it is not worth keeping it. BUT, they must have concluded..BUT…if we can just get some MORE people putting MORE photos on there we should make MORE money from displaying ads against those photos to MORE people (and with less people who are Pros, that gives us MORE people). But they couldn’t get more people using the free service. They couldn’t attract all the new generation used to Facebook and Instagram and all these places where they weren’t restricted to the last 200 photos only and where it was more about the person than the photo.

So the business objectives were set:

So change they did. A redesign to make it look more like other services and that they know the old pros will HATE. And a clear message to everyone to stop paying us money and go to the free service. Because given the messaging and the changes in account, that’s surely what they want us all to do!

The message in the email:

As a Pro Member, your subscription remains the same. You’ll enjoy unlimited space for your photos and videos, detailed stats and an ad-free experience. However, you can switch to a Free account before August 20, 2013

The message on the screen: 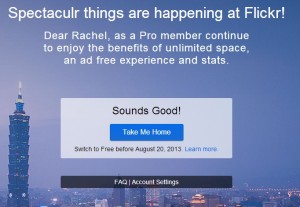 Flickr doing its best to make you go away

there are changes to the accounts. You can no longer buy a Pro-account (although the people who have them get to keep them as long as they keep paying). You can buy an ‘ad free’ account at double the current cost. Mashable has a good summary of the changes in Flickr account types:

Those are the changes – some make the free account a better option – but buying a subscription does not seem worth it.

The biggest outcry has been about the redesign. On my Twitter feed, it was mixed. Searching for immediate reactions last night showed a mainly positive reaction to the designs first impact, but reading the comments on the Flickr forum is about 99.5% negative. The people commenting here are the old pros, the ones that have been around a while. They typically don’t react well to change, but this is bigger than usual and the anger is far more than usual.

I also don’t like the redesign – I liked the clean nature of the old version. But what I hate most is how half-cocked it is. It’s a ‘Minimally Viable BIG redesign’. They’ve changed the home page to be a photostream. They’ve changed your profile page with header image and photo stream.. But everything else they’ve just slapped on a header and left it. it’s as though they were told they HAD to have it ready for yesterday and just get it out there. So it’s not been thought through. Now they have the home page looking the right to attract the new people who are used to more recent photo services, but it’s creaky and slow and seems to fail at times. My guess it we’ll get more changes as they role it out to the other parts. But in the meantime, it’s doing its job. Attracting new people, putting off the longer-term users.

Whenever there’s been a major change, there have people who have protested by leaving the service, stopping their subscription. However, given what appears to be a major push in focus, it seems the best way to protest is to KEEP paying them money as a Pro account, stay ad free and prevent them serving ads to you.