Update – Twitterati was an April fool (sort of).

With utter predictability and inevitability, commercial interests invade Twitter. When first showed it to colleagues some of them were asking questions about how to market on it, others were just generally fascinated. But now we are getting into the real activity.

First of all we see domain squatters, people picking up usernames with no intention of ever using them just in the hope that someone else will value them and pay good money for them. Then we have those who are speculating on names as a way to make future money off the service, eg getting zipcodes or the like to offer location based services. Given the current open subscription model, where you have to pay nothing to just add a person to your friend list, I’m not sure if these service ideas will get off the ground as a value proposition anytime soon, but they could still be useful tools. And I’d be surprised if the Obvious crew stood by ad let that sort of service make money by using the servers and tools without contributing somehow!

The we have the marketing within Twitter, the pay per tweet concept that I speculated about in the earlier post. Twitterati looks to be running a beta programme to pay people to Twitter about products, as i was updated on far too many times by a ‘friend’ who decided to spam the service yesterday and today. Ooops, this was an April fool. But one that was too close to reality and felt real given the some of the conversations I had had over the last week – I’m pretty sure something like this has to be in the works. The full story is over on YesButNoButYes . The very real possibility of and the fact that it was around on my Saturday (damn timezones) meant I did not even consider that it was hoaxy.

And I twittered it, and waited. I didn’t expect a mad rush of emails, not in a single day, but obviously within the email, I’d embedded the notion that to be noticed, you had to spread the word. So people did, and by the end of the day, I had close to 100 requests to get into the program, some from pretty well-respected bloggers (apologies to all of you, but SHAME on you for offering to sell out your Twitters so easily 🙂 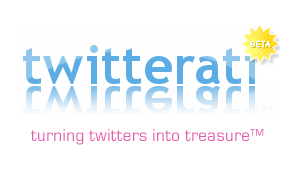 You will only see the paid tweets if it is someone you are subscribed to, so you can always get rid of them; unfortunately the nice trick of Twitter turning most URLS to tinyurls means that you may not be able to see where they are sending you until it is too late. But even if you unsub from their, their tweets could still be ‘polluting’ some of the nice tools that have been built, such as Twittervision. Yesterday, this was being hit by multiple tweets from ‘ads’, what looks like an automated bot that has posted over 7500 tweets in the last 2.5 days. 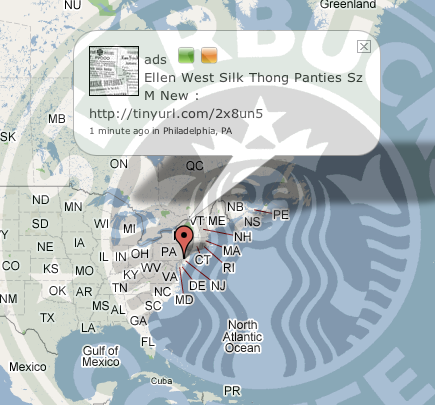 But David Troy has anticipated this and the green or orange buttons allow you to mark a tweet as unlikeable. And ignore the Starbucks logo on the map – that’s the April Fool for the site, after Scoble’s suggestion he gets sponsorship from them and mark the stores on the map.

These won’t be the last attempts to make money from the service. The only saving grace I see is that you can so easily remove people from your list to avoid the commercialism. But there could be a great set of attention ads – set up a service that will send promotions to you based on keywords. So if i was looking for hotels in a city, I could be sent some great offers that are just for me.