I’ve seen a Royal Navy version, a cartoon version, now the funniest yet, the Lost version. Safe for work even if your version of the websence blocker bans it. (then again ours I have no idea what ours it up to given some of the things it blocks). Via YbNbY PS – love the nod to Terry Pratchett

Via Engadget, a group of guys requested donations in order to buy an iPod and then proceed to smash the gadget instore. The video of the act can be found on their site smashmyipod.com. Pity they’re in Canada instead of the UK; they could have called it a protest against capatalism or DRM or something and entered it into the Turner Prize. Which, by the way, has podcasts for you to download, with the artist and the judges commenting on the works. It also allows you to submit your own ‘casts about the pieces and these may be put up.

I watched 2 completely different spoof videos based on Queen’s Boheemian Rhapsody. The first, via Boing Boing is called Zero Wing Rhapsody; funny lyrics here. The second uses Queen’s original track and is inspired by the British Army’s Amarillo video. The senior service’s (the Navy) video of the whole thing whilst miming the lyrics. Not as slick as the first, there are funny moments – the Titanic-like air guitar moment, the pilots headbanging whilst flying the helicopter and the insight about what really goes on in the officers’ wardroom.

I went along to the second Girl’s Geek Dinner last night. About 50 people turned up and, judging by the level of chat, it looked like everyone got something out of it. Ably organised by Sarah , there were two speakers. Eileen Brown spoke about evangelism in Microsoft and being a woman working in a perceived man’s world. Adriana spoke about blogs and companies, how the word is spreading and interest has taken off over the last two months (one mention was for Cillit Bang, whose clumsy use of the media is recorded on the BBC site as going a bit Pete Tong). Somewhere, there’ll be a podcast put up. The next one is planned for January, so spread the word.

A see a perfect set of poker chips as a Christmas present. All I need to do is learn to play the game – but I get that much spam for sites that want me to play, should not be hard finding somewhere ;o)

“There could be a few showers when the match kicks off.” (Translation: You know that bit in The Matrix Reloaded when Neo finds that everyone on Earth has turned into Agent Smith? Remember their fight? With the rain beating down in droplets the size of watermelons? That’s your football match, that is.)

“Expect it to grow a little chilly in the evening.” (Translation: Expect conditions to rival those prevailing during the final moments of Captain Oates.)

“Earlier today a lady rang the BBC and said she had heard that there was a hurricane on the way. Well, don’t worry if you’re watching, there isn’t.” (Translation: Four horsemen ride, the Beast comes from the sea, it is the end of days, etc, etc.)

Of course, in this case the last one is true, being the exact quote from Michael Fish a few hours before a hurricane struck the UK in 1987, causing widespread damage.

The IgNoble awards were presented on Thursday night. My favourites from the winners:

LITERATURE: The Internet entrepreneurs of Nigeria, for creating and then using e-mail to distribute a bold series of short stories, thus introducing millions of readers to a cast of rich characters — General Sani Abacha, Mrs. Mariam Sanni Abacha, Barrister Jon A Mbeki Esq., and others — each of whom requires just a small amount of expense money so as to obtain access to the great wealth to which they are entitled and which they would like to share with the kind person who assists them.

FLUID DYNAMICS: Victor Benno Meyer-Rochow of International University Bremen, Germany and the University of Oulu , Finland; and Jozsef Gal of Loránd Eötvös University, Hungary, for using basic principles of physics to calculate the pressure that builds up inside a penguin, as detailed in their report “Pressures Produced When Penguins Pooh — Calculations on Avian Defaecation.”

At dinner last night, I was discussing procrastination and getting things done (in a round about way). And decided using a combination of AI and IM could be the way to go; a solution could be a friendly (or not so friendly) buddy who would ask me questions about whether or not I have completed the tasks that I told it about and be my personal NagMonster (the name may need working on!)

Now, the base version could be just text; it may only ever hold a few items at a time. But it could be premiumised: with the increase in voice on the IM clients, a vocal version could be done as well as a video version. And then downloadable voice files can be sold – to personalise the NagMonster in the accent and sound of your choice. Or choose the look of the video message. Lots of things to do. Of course, if I had it, I’d probaly kill it the second time it tried to nag me.

It’s International Talk Like a Pirate Day, so you’re supposed to talk like a pirate all day – like this Savage Chickens cartoon. However, I subscribe to the theory that not all pirates were linguistically challenged and will continue to talk (and type) normally…;o).

Update…Cap’n Scaramouch comments about me not getting into the spirit of this. He may be right, but I tried, I tried but it just does not work. I obviously did not watch all the right Errol Flynn movies in all their reriuns- and I did not notice Johnnie Depp talking this way…

I love the weird cartoons from Savage Chickens. A little laughter in the morning. 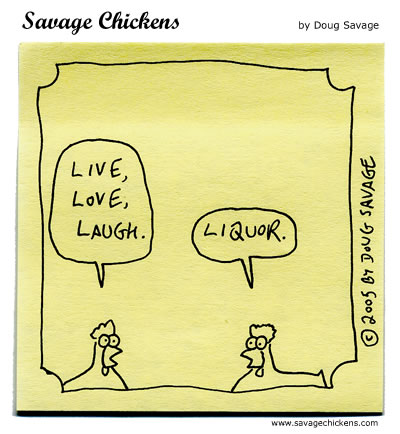 July 15th is St Swithin’s Day, which means, if you follow folklore, that the next 40 days weather will reflect the weather today. So, it’s going to be hot and sunny for the rest of the summer – hooray! Absolutely wonderful if you have air conditioning; however unless you’re in an area that got lots of rain over the winter, start expecting your garden plants to die and the car to be dirty as we head into drought conditions. For a slightly more scientific reason why the weather today can be used to predict the trend for the rest of the summer, head over to the Times.

Of the many photoshopped images that were floating around after Wednesday, these 2 are my favourites. 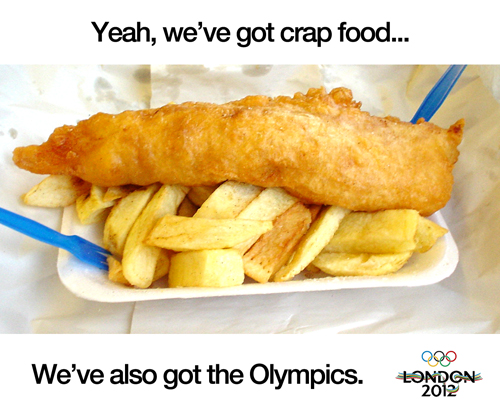 (despite the fact that a good fish supper can’t be beat!) 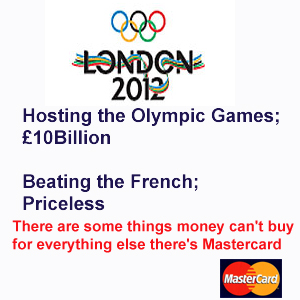 I’ve seen some funny things on the breakfast table but at the hotel this morning they were offering sliced carrots. I could face them later in the day for a healthy snack…but not at breakfast. Apparently they are quite common on buffets here.

I’m not that more awake than I was last night, but at least it’s daylight

First of all one observation I must make about these types of dinners, there’s an advantage that is especially obvious when in a private room: there are no queues to go to the ladies. According to the sign up sheet, the ratio of male:female was around 9:1, which appeared to be the case on the night.

On getting to the venue, it was obvious that the human herding instinct was coming into play. It was a reasonable sized room, but everyone was crammed into the space around the bar, making it difficult to get in, get your badge or move around at first. It was well organised, with Kalee on the door collecting money before you were allowed in to the crush. Later, as more people moved into the room and especially as the food started to be served, we expanded into the space. As a bunch of people who probably spend a fair bit of time in ‘solitary’ on the internet, we definitely like our gatherings!.

The food was good – fahjitas, the beer and margueritas were flowing and the company was intriguing in the most part. Lloyd Davies wandered around for an hour interviewing people – I’m on there somewhere; a recording was made by Kosso of Robert’s speech and Q&A session. After that people started to drift away. I probably spent about half the time speaking to people whom I knew (or had a least met once!) and the other finding new people to talk to.

Went to this months Geek Dinner this evening, arranged by Hugh MacLeod and with special guest Robert Scoble. A very pleasant evening it was, chatting with plenty of people whose names and links I’ll add in the morning! Meanwhile, photos are over here.

Go-karting was lots of fun. I’ve never done it before, so it was a good challenge. After a briefing about all the rules, with lots of safety tipos, we all (there were 12 of us) got kitted out and ventured out onto the track. You sit about 6 inches off hte ground, in front of 2 noisy engines, an a very snug bucket seat. With no seatbelt. There’s a small steering wheel and 2 pedals only. we had 10 minuts practice and then went out for a 30 minutes race. I couldn’t beleive how much hard work it was to keep the karts on the track – no power steering. I only spun to a halt once, which I think was a minor miracle and managed an average of 30miles/hour. Scary stuff. I was pleased to see I finished 5th, behind people who had done this before – a good result for me.

The Crazy Frog apparently got to No 1 in the charts, pushing Coldplay into second. It’s not a song, but a ringtone; this is what happens when you allow downloads into the charts to make them reflect purchases more accurately. Can we change this now to only have ‘songs’?

BBC Breakfast is currently talking about a Crazy Frog going to the top of the charts with what sounds like a remix of Axel F’s old hit (no idea what it’s called). I think I’ve missed a cultural phenomenon?

I know that occasionally Open Source fans can get slightly vitriolic, but surely an Apache Regiment is going too far?

Time Magazine has listed the ‘Readers voted’ top 100 films.I;ve only seen 24 of them -could be time to visit the video store (and i just realise i should start calling it the DVD store)