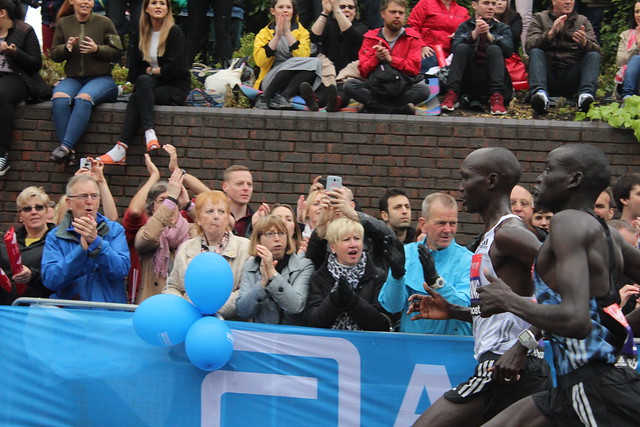 Last April I entered the Paris Marathon as my target for the year, but I still put my name down for the London ballot, just in case. I didn’t get in, but as a result of finally joining a running club I get did get an option to marshal the race. Having being very grateful to people who have marshalled the races I’ve run, I thought it was time to give something back. 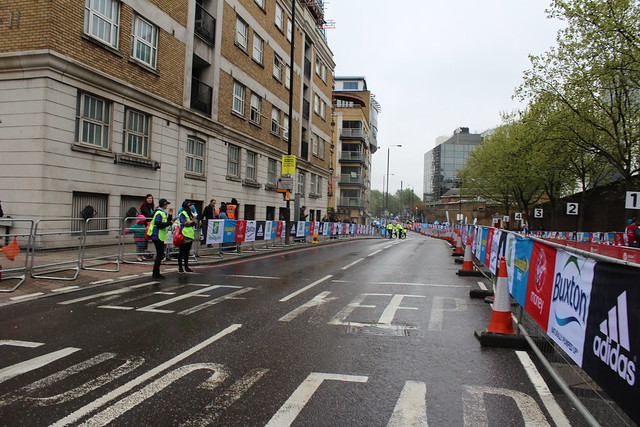 The day started early, with a group of us meeting at 7am at the Tube station to make our way to Shadwell for our briefing. West 4 Harriers have for years being part of the team that marshall on the Highway, which is from Tower Bridge mile 12.5 to Limehouse (mile 14) and the reverse route miles (21.5-23, or near enough). it’s a great piece of course as we get to see the runners twice. 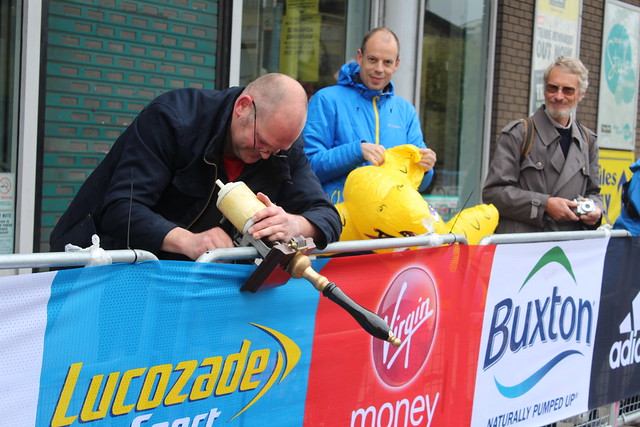 Briefing done, we spread out onto the course for 9am and then our job was waiting. Not too long, as we had a series of elite racers come by. The wheelchairs, the IPC championships, then the women elite and finally the men elite, who were followed by the trickle, stream and then flood of the masses. 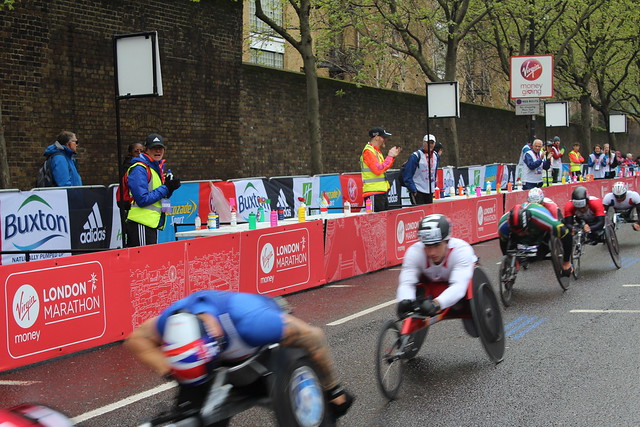 We were there for safety, to answer crowed questions and most importantly for the runners. We started off with a security role, keeping an eye out for left bags and then an eye out for anyone who may decide that jumping out in front of the elites would be a good idea. Luckily, nothing like that happened on my section, although the section along did have to call in the police after a woman had left her suitcase next to the course as she went to the toilet (there were long queues, she was gone a while). 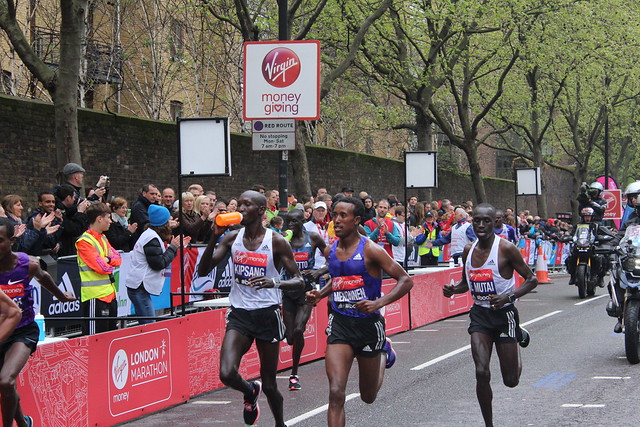 Later, it was all about supporting runners. On the way out, most runners were going along fine. On the way back, the effort was beginning to take its toll. Last year, with the heat, there were apparently a lot of collapses in the area that needed support. This year, I had to deal only with one person who had a very heavy fall and knocked the wind out of her. She did get up and carry on, hope she finished. 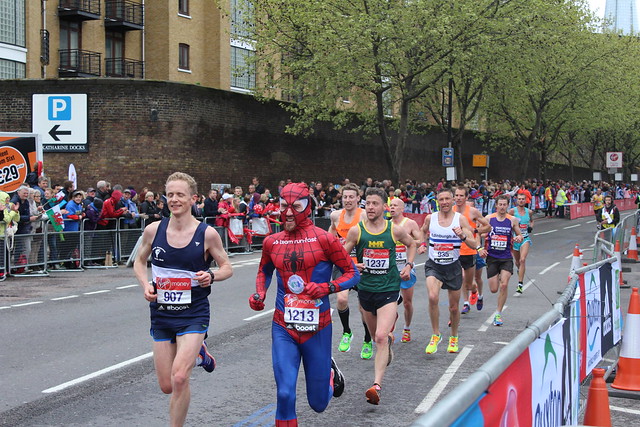 So as it was quiet, I had the chance to take a lot of photos (you can find them all on Flickr) and chat with a BBC spotter, who was set up to spot celebrities (and great fancy dress) for the camera that was about 200 years up the road. So celebrity spotting and cheering was the rest of my day. Along with freezing as it was very cold – I ended up having to dance a lot to the music just to keep warm. 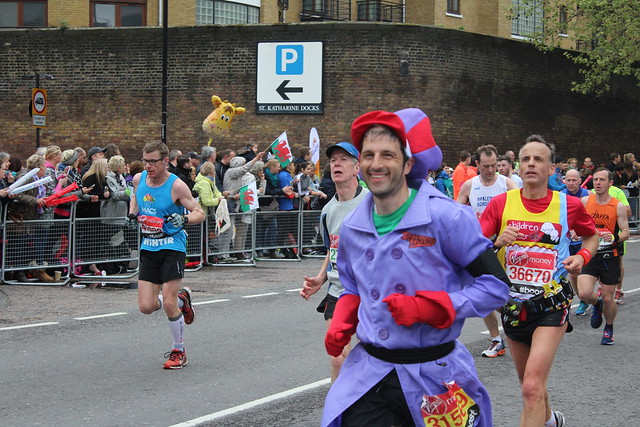 This was the first marathon I’ve watched end to end and the difference from start to finish is huge. I think London, with its large emphasis on charity places and fundraising, may be slightly unusual on the people it attracts – it has a 7 hour cutoff time but there appeared to be a lot of people running who would not make that. 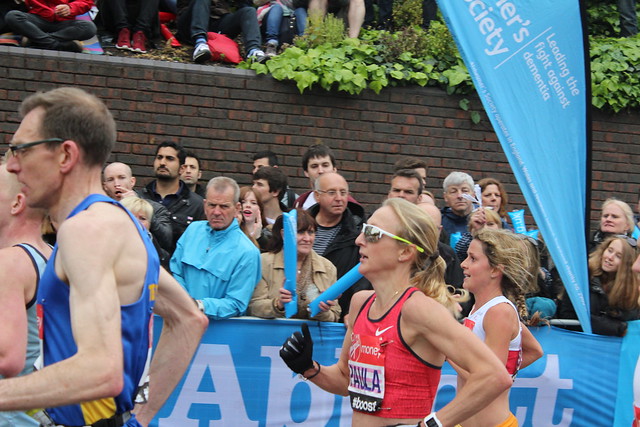 As time went on, the stream reduced back to a trickle as the slower pens got to the 13 mile mark. The the sweepers came by, the car that told everyone that the course was closed, that they had to move to the pavement. Followed by the street cleaners, the rubbish collectors and the course demantlers. I felt for the people who were being overtaken at that point – at what point would they decide to stop if they are overtaken by course closed at 13 miles? People who had taken on the challenge but had probably not realised what that meant! 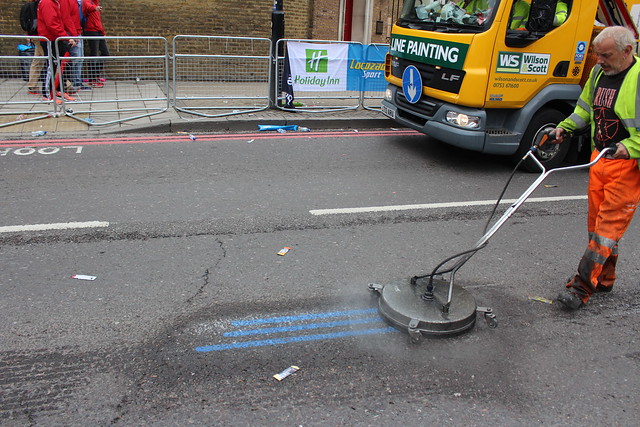 As the runners went back the other way, the sweepers turned up again. This was at 22 miles, you’d got a mixture of people who had obviously suffered an injury or had hit the wall. it was all walking and at this point the stare of death had set in. I’ve been the, I know it. It’s one step at a time, just pushing forward to the finish, knowing about but not having the energy to acknowledge the comments. this is the point I made sure I was loud and encouraging, this is the point it is needed. 4 miles out, I would assume that everyone who was passed by the sweeper would keep going to the finish, I hope they got a medal! I aslo saw a lot of family and friends joined them at this point, just to keep the march going.

Overall, a great day, well worth it. Would I do it again next year? Only if I’m not running! 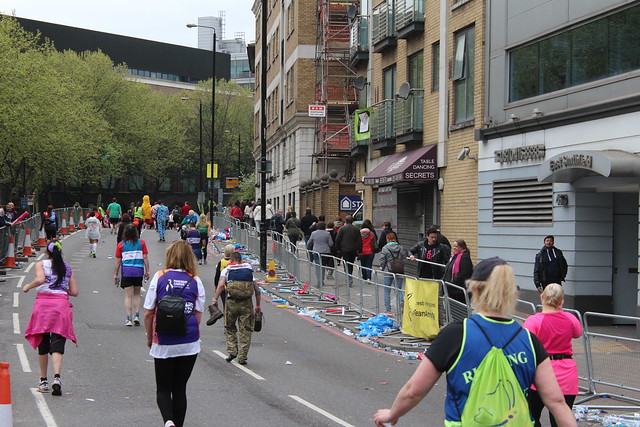 One thought on “Marshalling at the London Marathon”