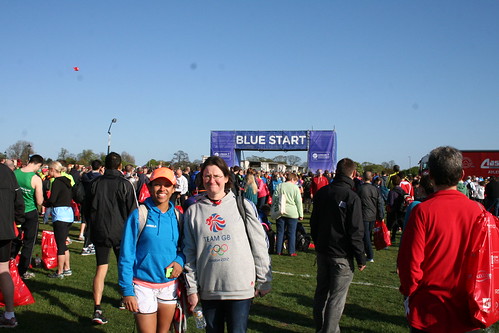 The day started off early! 5:30 wakeup to get 6:30 bus. I always prefer to be early and hate travelling in crowds and achieved this extremely well. Saw very few on the bus, tube or train and got to the meetup point 20 mins early, just before 8. So meet up with a few people from a running forum, plus with Angela, she’d volunteered to run with me – and I was extremely happy she did.

We entered the gathering area about 9ish, made the obligatory loo visit and then got ready – sun cream and vaseline. It was too warm to wear my throwaway clothes, which I’d dragged all the way there (and then took all the way back). made our way to Pen 9, and found a corner to sit and wait. When I’d entered, I had no idea what time I’d do, so probably put something close to 6, therefore we were at the back.

And we were off. I’d made the decision to run 9:50-9:55m/m as far as I could, knowing that I would fade and that’s what we settled into and pretty much managed for the nearly 30k. The first 5k was fairly quiet as we went through Woolwich areas, with the men yelling ‘hump’ making me smile, especially the kid who just kept up yelling. 🙂 Nothing much to report about the next 5k, we just kept ticking the miles down. the crowds around Greenwich were brilliant and my family had managed to get a spot right by the Cutty Sark so that was the first photo opp, even though by this point I was starting to look a little like a drowned rat, as I’d been pouring water over me in an attempt to keep cool. 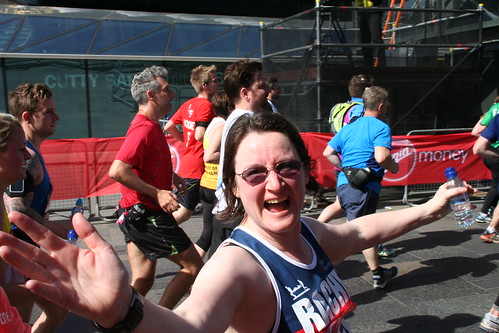 All the time we were playing dodgems, trying to get around people and at times we were definitely slowed by the crowds. In Surrey Quays, one guy ran right into the traffic island marker and took a very bad fall right in front of us, Angela helped him up (and then he did the ‘I’m OK’ and just limped on. I noticed there were lots of crowds around the shopping centre, assuming they’re combining their day out. And all through the earliest parts, heaviest crowds were round the pubs. I didn’t take any of the beer that was been offered though 🙂

At Tower Bridge and I definitely had a emotional moment, very close to crying, but got through that and made sure I was smiling for the camera. At this point, I was definitely starting to feel it, half done, another half to go. It was time for another gel, which I was taking every 4.5 miles. The hips were starting to get sore (although they were fine at the end of the race) and from about mile 16 my arms and legs were basically pins and needles and there were times when I could not feel them properly – not a nice feeling at all! From about mile 17, my ability to sport gaps and move into them had started to go and I got stuck behind people a few too many times. From here, Angela switched from running with me at my pace to encouraging me and keeping me going!

I was having to dig in now and mental goal changing from finishing in a time, to just finishing. The heat was getting to me, I was feeling sick and pins and needles were getting worse. At 20 miles I did 30 secs walk and that was to try and shake some feeling back into the limbs. That then became the pattern for the rest of the way, it was my mental reward for making the mile. Saw the family again at mile 22(ish) and there was no pause for photo, it was a matter of keeping going! On and on, with more more people walking or trying to stretch out cramp. you could just feel the determination and grit to get to the finish here. The Blackfriars tunnel was good, loved the Lucozade balloons.

Onto the final stretch, the Embankment. I’d run along here a fair bit during training and now it was just full of people rather than cars, a far better picture 🙂 Everything was focused internally now, keep going, keep going, one step at a time. There was nothing in the legs at all, no ability to increase the pace. Although looking at the Garmin, I was moving faster than I thought! The last 3 miles were run at a pace of 10:33, 10:45, 10:45 which is still faster than my LSR pace, it just felt a lot slower. It was all about the mind games. 1 mile, it’s the run to Kew Bridge, 800m, it’s 2 laps. Round the final corner, wash hoping the sight of the finish would give me a boost, but no, nothing. Plod, plod, plod. Tried to raise arms for camera, nope, not happening. I’m still pleased with my final time though, 4:30:10 is pretty good. And I completely smashed the others from work 🙂

Through the finish and the everything stopped. The legs didn’t quite want me to stay upright, so Angela and a friendly marshal supported me until I convinced the legs to work again! Timer chip cut off, medal collected (oh yes, I LOVE that medal) and bag collected. OMG, the walk to the end of the mall to get into the park, then the queues and crush to try and get somewhere. All I wanted to do is sit and have a drink and stretch out. Finally out, drink, snack, change the shoes as my feet were so sore! Then met up with Malcs (and others, I can’t remember!), and he and Angela made their way to the pub and I went to meet the family at the Help for Heroes meeting place, which was a welcome haven. Quiet, a seat, food, drink and a massage on the legs. I also got a second medal, as well as a round of applause as I walked in 🙂 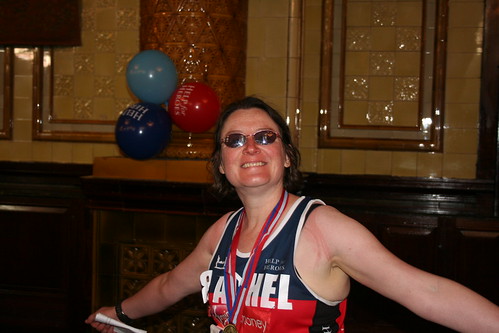 My first marathon done, a wonderful experience even with the pain. So what could I do differently?

So what am I going to do now?

The goal for the summer is to build on my speed, with the aim of bringing my half time down as far as possible, Sub 2hrs should be pretty easy (I hope, but let’s see where I can get to) So I’m going to join in the local running clubs Speed work evenings – and hopefully get some coaching on form as well

I’ve got 3 halfs booked for September, with Ealing being my main focus. I’ll be running through the P&D plan for that. And I intend to keep the mileage up over the summer as well. 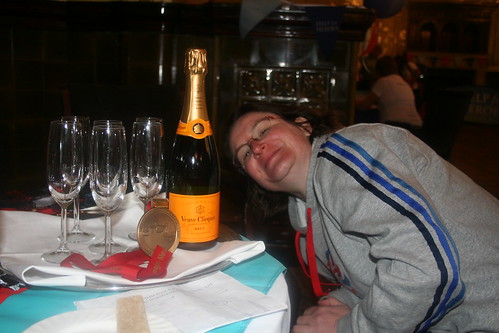 One thought on “Running the London Marathon”