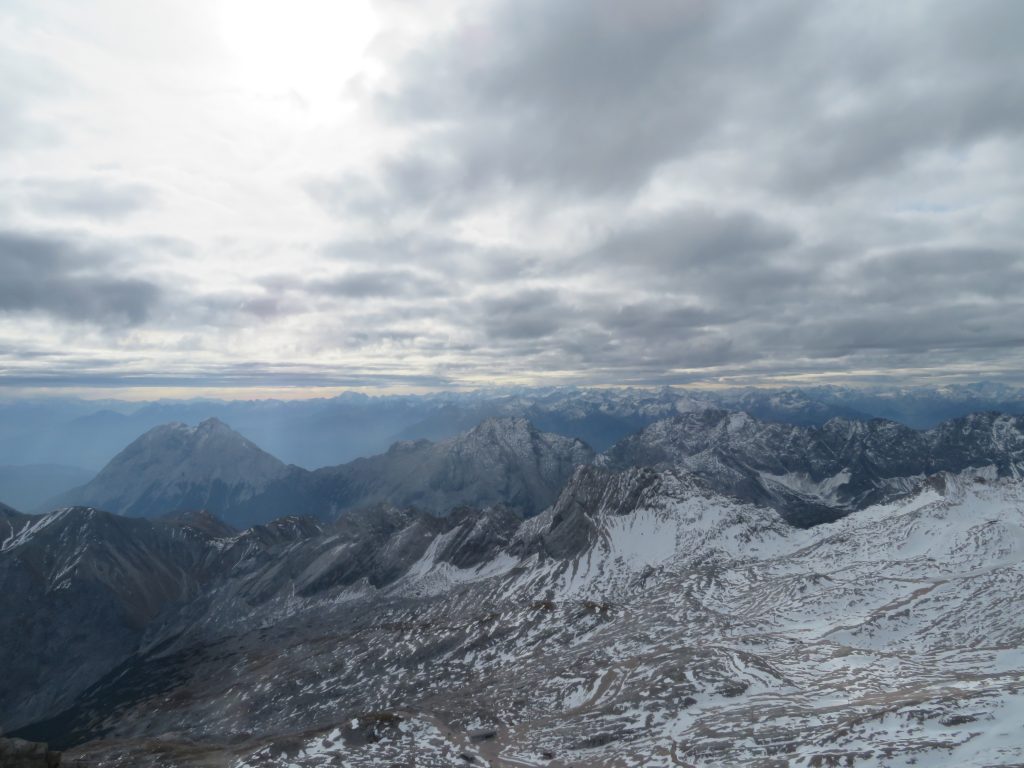 Looking south across the Alps

As the year slips into autumn, I thought it was time to get back out into the hills. After some time spent looking at options, whether to fly or not, whether to drive, I decided on a visit to Garmisch Partenkirchen, just a 3 hour train journey from Nuremberg. It’s got mountains and lakes, hills and gorges. Seemed perfect for a walking weekend.

I booked a hotel just by the station, easy to get to Reindl’s is perfectly placed and has a good reputation, although the initial impressions were a little off – I’d arrived around 10 and there was no longer anyone in the kitchen, so no food possible. But luckily, this was the only misstep during my stay. 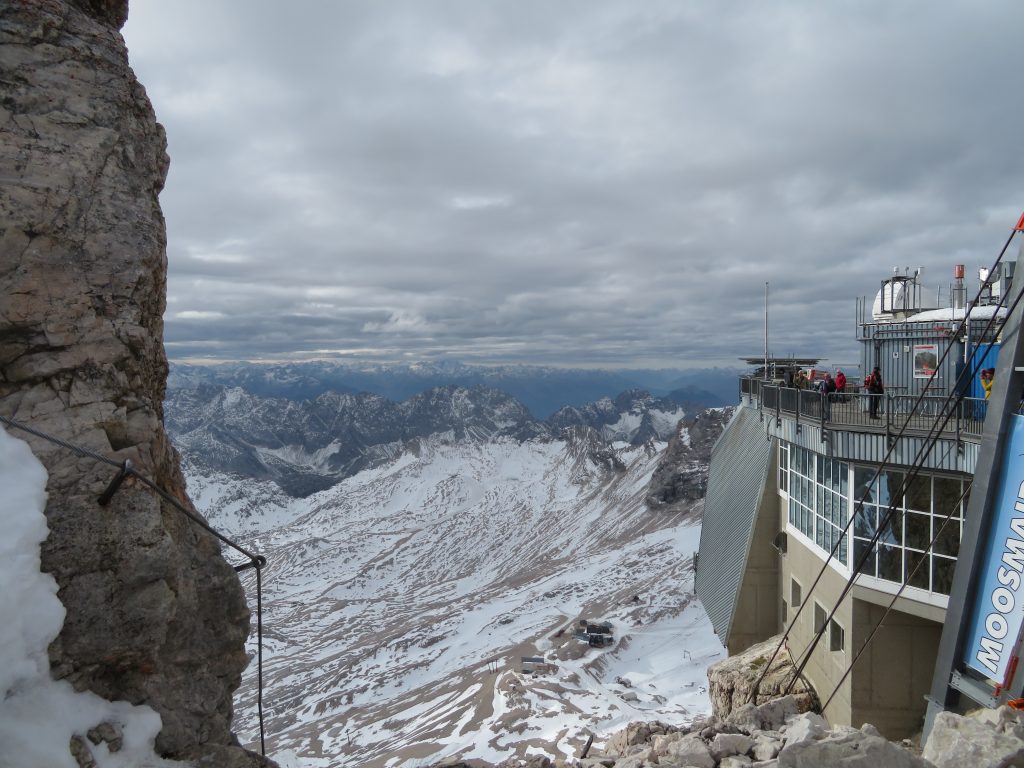 Looking down from the top of Zugspitzen

Awakening on Saturday, the skies were grey. Not what was forecast, I was expecting sun, but luckily this arrived a few hours later. One last check of the weather report and today’s plans were finalised. First, a tip up the mountain! Zugspitze is the highest peak in Germany. I’d briefly considered hiking up to the top, but there was not enough light/time available and the huts were shut, so that was not the best option. Instead, I took the easy way – a train. Just behind the main station, you can find the Zugspitzbahn, a hourly train that can take you almost all the way to the top. It’s not cheap though – 53E to get you there and back. It starts off like a normal train, until you get to Grainau, when it changes to a cog train, to get up the incline. Further on, from Eibsee, they’re also rebuilding the cable car, replacing the previous version that was built in 1963. The new car is going to be able to take nearly 3x more people (120 instead of 44); it will be quicker than the train with far better views! 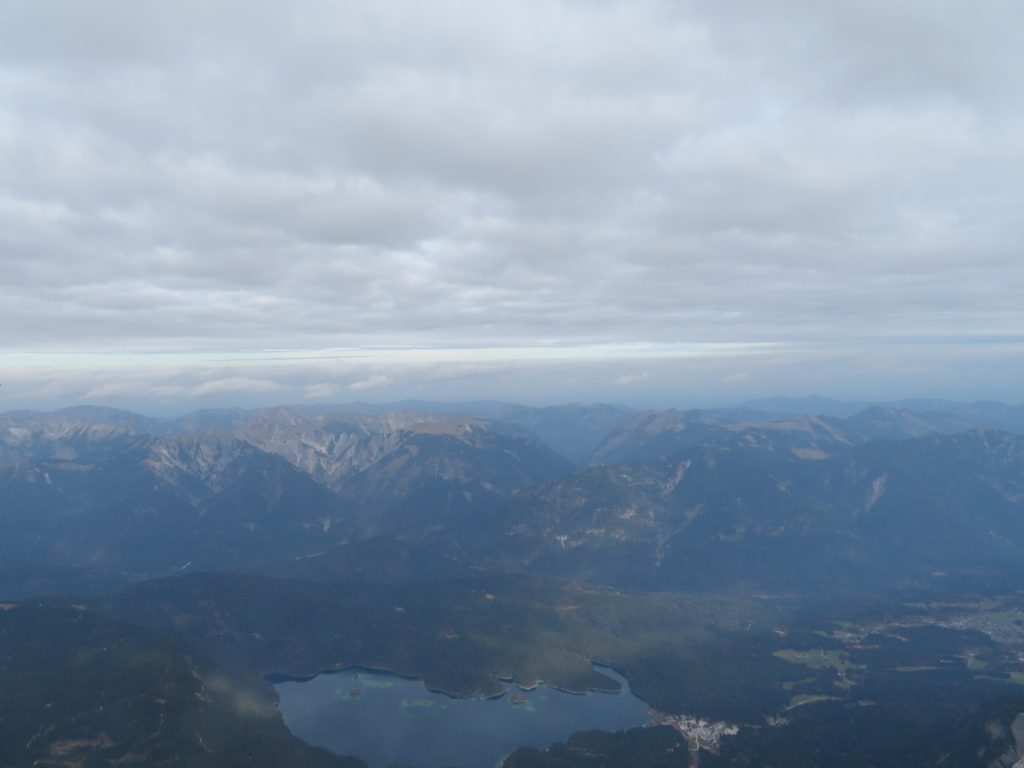 Looking down on Eibsee

But for today, just the slower train (the total trip is about 75mins) that heads up and then though the mountain. The train takes you to Zugspitzplatt, on the southern side of the mountain. From there, you transfer to the Gletscherbahn cable car (you can do this as many times as you like, it’s covered in ticket price) for the final section up to the top. During the winter, the Zugspitzplatt looks like to be a ski centre, with plenty of lifts to take you back up the slopes. 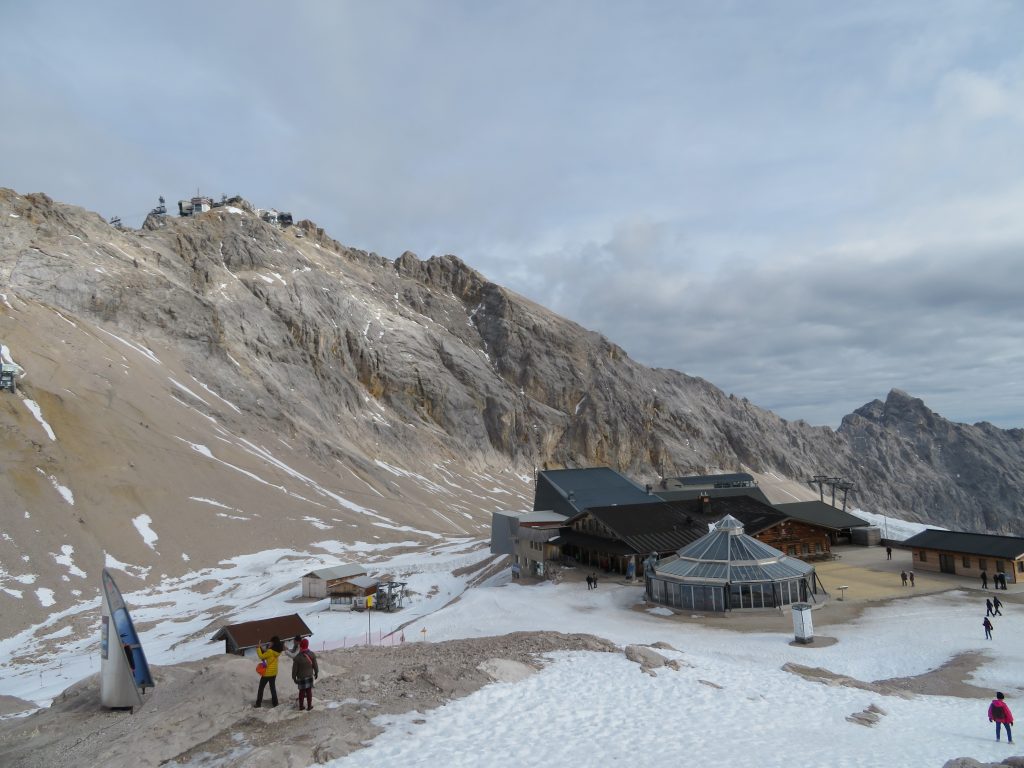 For my visit, most of the top of the mountain was a building site, as they upgrade the cable car station connecting to Eibsee. However, you could still get around enough of it to take in the views. To the north was the view back down to Eibsee, to the south and east the Glacier, the ski slopes and more mountains, to the west were the mountains of Austria.

You can also take the final climb to the top of the mountain, by leaving the terrace, down the stairs then up a small via ferrata route to the top. Quite a few were doing this (I did part of it, not feeling like the final scramble). I wonder if there are many accidents because it’s a long way down! 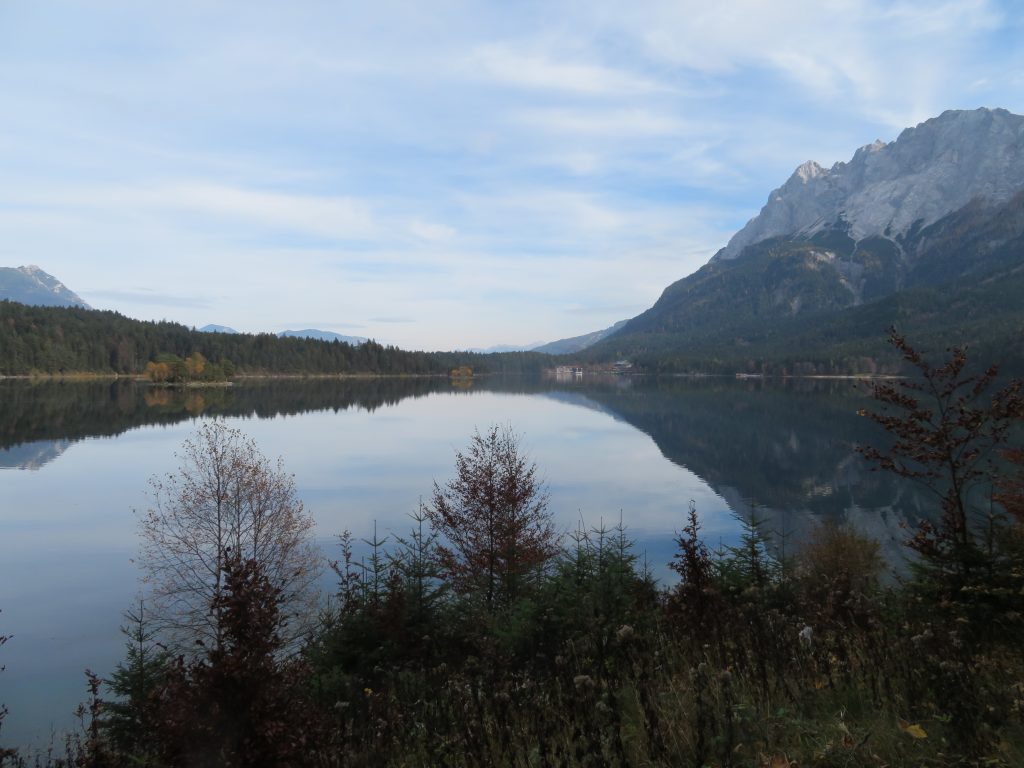 Reversing my route, I wandered around the station area for a bit; they’ve installed a few information boards, there’s a chapel and you can just wander around, or eat and drink in one of the 3 or so restaurants there (there’s also a couple of restaurants at the very top). Back on the train and this way I get off at Eibsee – the ticket covers you breaking up the journey. More bars and restaurants on the lakeside near the station, but my goal was to circumnavigate the lake, a trip just under 5miles. It’s a wonderful path around the lake, a sparkling clear body of water, with mountains all around. There were lots of people doing the same walk – I’m guessing in the summer it gets completely packed. Even families with pushchairs were doing it, although as most of it is not paved, that looked a hard job! 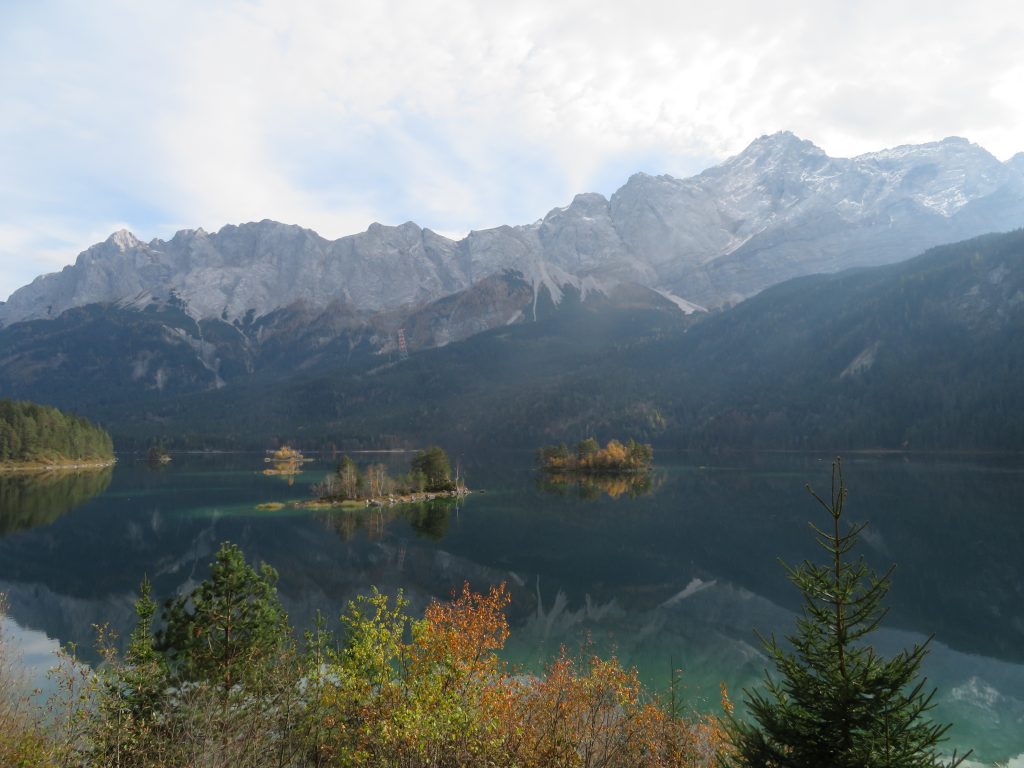 Back at the hotel it was time for some cake – they offer free cake in the late afternoon – and then spa time. There’s a pool and a sauna suite available (wet and dry saunas, plus a steam room). Then I ended the day with a superb meal at their restaurant. (actually I ended the day watching F1, but that is proabably not everyone’s choice). They do a good fixed price menu option and is obviously a popular place, as it was nearly full, not bad for ‘out of season’.

Sunday arrived and as forecast, it was raining. After breakfast and checking out, my plan was to stick closer to home – the famous Partnachklamm (Partnach gorge), a 700m long, 80m deep gorge that was declared a natural monument in 1912. By the time I was ready, the rain had stopped and luckily, did not come back when I was out and about. It’s an easy walk of a couple of miles to the gorge, out of the hotel, follow the river along the Geologischen Lehrpfad “Die Steine des Alpenraums”. Basically, that’s lots and lots of rock examples. Each sample is labelled and usually has information, although it’s only in German. 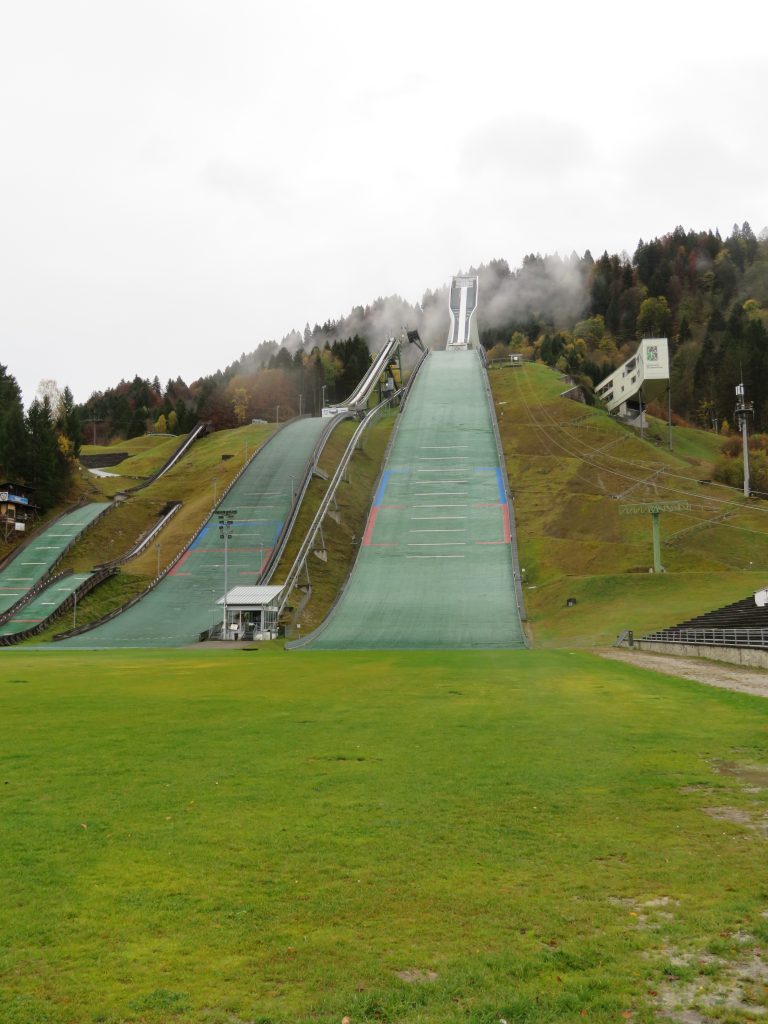 Past the Olympic stadium and the ski jumps that are in regular usage. Given the sizes of the jumps, from small to Olympic, I assume they teach ski-jumping here as well. You keep following the river, which can take you right to the gorge. But not that path for me, I’d decided I’d go up into the hills and come back down the river, so I branched off and started the climb. You follow a narrow road up to Partnachalm before dropping back down the side of the valley, along a steep and winding path. 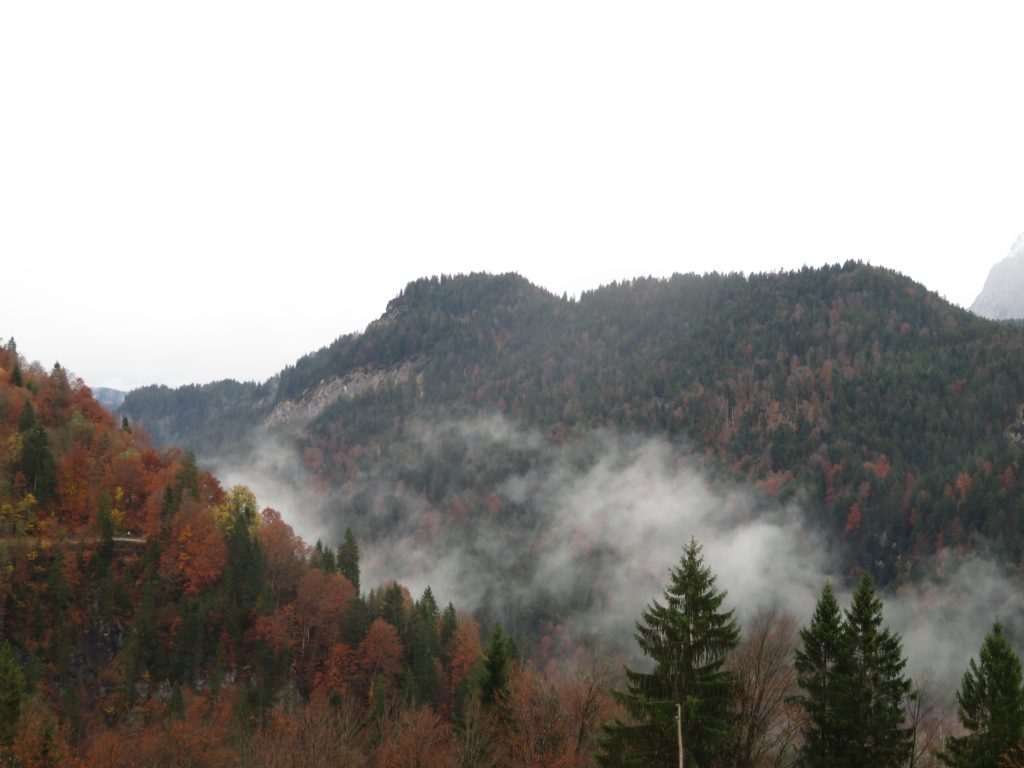 It was here I started getting traffic, as many seemed to have the same idea, doing the route in the opposite direction. The gorge costs 5E, but on this day, there was no-one guarding the top of the gorge path (not sure if there would be on busier days) so you just start the walk. All the way along, a narrow path has been carved/blasted out. Parts of it are tunnels; there are no lights so you rely on windows (or phone torches). 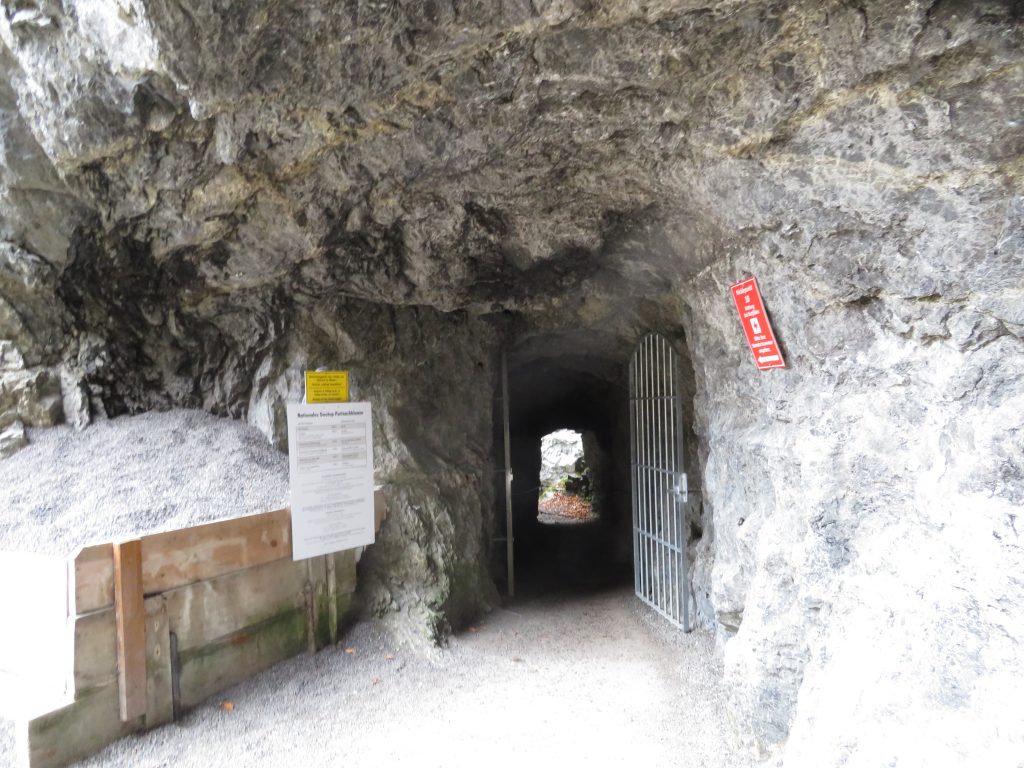 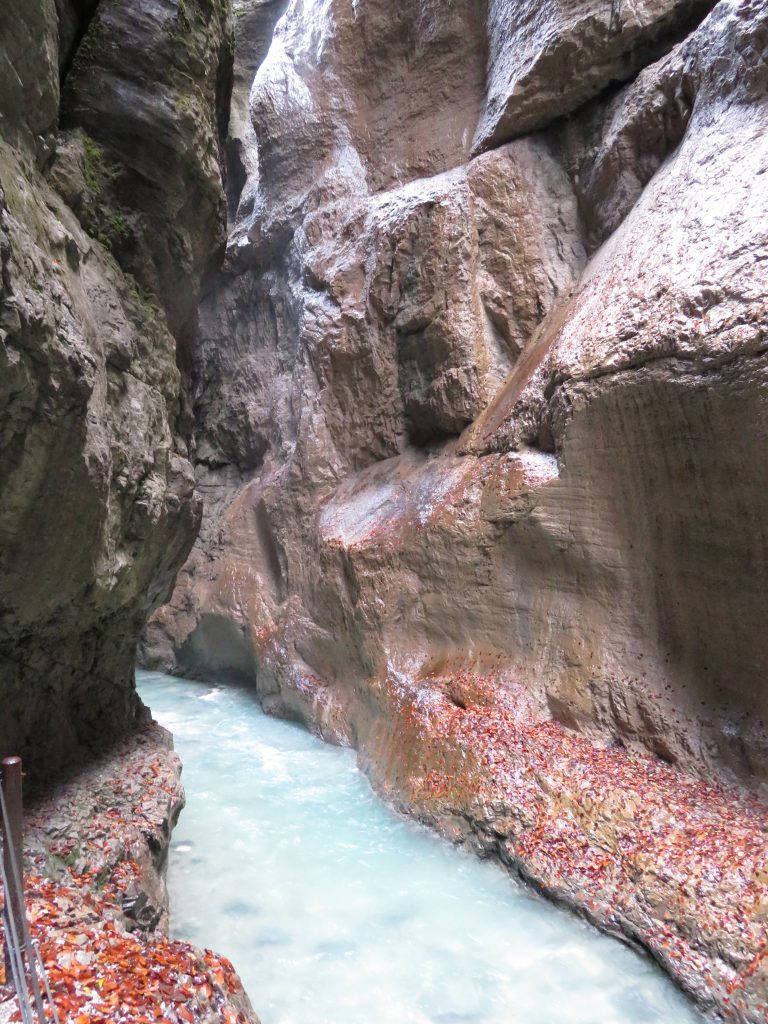 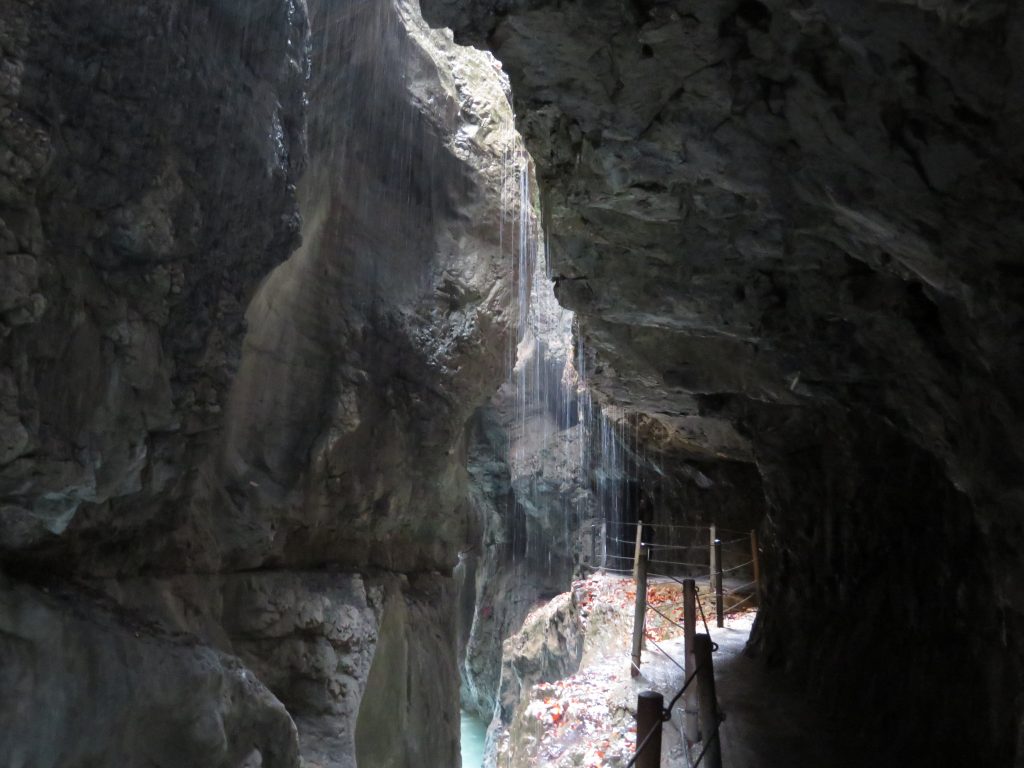 It is marvelous and magnificent. At this time of year, there are swathes of beech leaves, that glow like wet copper on the rock. The water is milky blue and rushes down, drowning out most conversation. Fully recommend this as an outing from Garmish, it’s amazing. At the bottom, you need to pay your money. Most people travel up the gorge and then appear to come back down, with the fitter ones heading up the valley to walk down the other way.
That was it, time to get back on the train north. A superb weekend away, in an area that is an outdoor
enthusiasts paradise; hiking in the summer and snow sports in the winter. 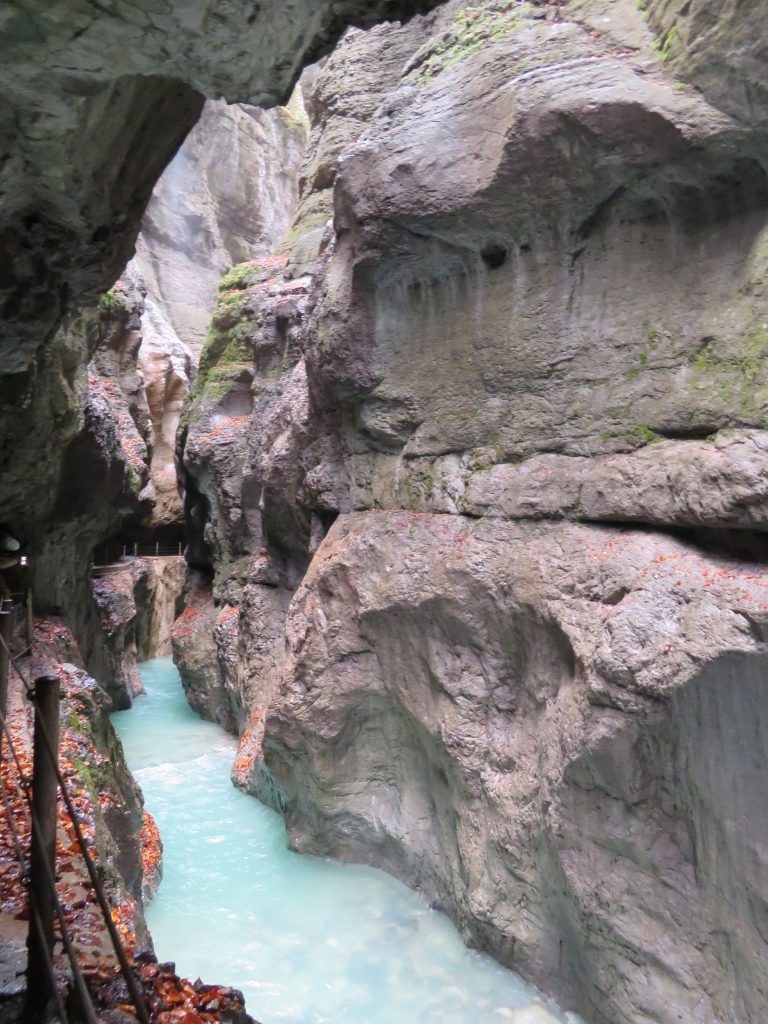 For the full set of photos see on Flickr: Zugspitzen and Eibsee and Partnachklamm