Last night I went to a business networking event. Unlike some I’ve been to, where it is a ‘come along and chat’ night, this one was more structured in that there were a number of experts who provide free 30 minute sessions during the night on their specialised subject. Even though they are trying to convince you to use their services going forward, the selling was pretty light and the sessions are no obligation with some pretty good advice given out. Last night there was an emarketing expert, a Management consultant, a voice coach and a lifestyle coach.

In conversations with the attendees I spent a lot of time talking about blogging. There was a lot of interest from people who were aware of it but did not understand if and how it could help them in their business. A lot of people had websites, often because ‘they had to have them’ but were not leveraging them to drive business. One person there was getting their website rewritten, unbeknownst to them it was going to become a blog – but the word had never been mentioned, it was just being described as an easy site to update and get comments on. By the end of the evening I had a number of people to whom I need to send out a load of links. (which I can use as a post in my new blog about my new business…). I was also busy recommending Naked Conversations as a good starting point as the book is out in the UK at the end of January.

Looking for the book, I found a weird glitch. Using the search term ‘Naked Conversation’, Amazon came back and told me there was nothing that matched the term ‘naget’…I’d love to know why it does that. 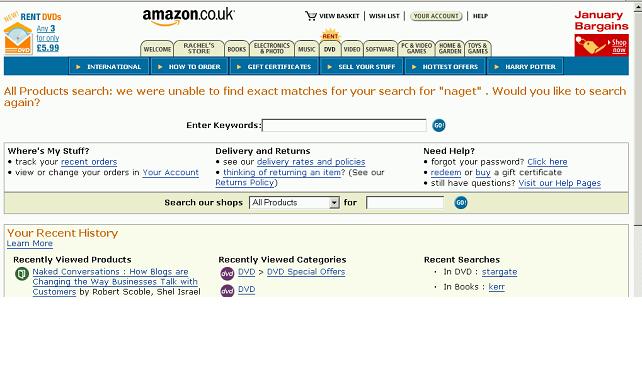