I’m getting really frustrated with Twitter at the moment and it has nothing to do with the service itself but to the explosion in use. Since the start of the month I’ve received 50 new followers, very few of whom I’ve followed back. Some of it, I’m sure, is because I’ve been on the service a long time and am often on the front page of the followers list due to my ‘membership number’. I’m pretty much on my limit of people I’m following, the limit of how useful the tool is. For me, it is not a broadcast tool, it’s not a popularity tool, it’s a way to connect with friends and ‘friends’ (those online acquaintances who I know virtually, or want to know or find interesting). So here’s some of the reasons I will and won’t follow you. Everyone has different reasons – which is why I don’t feel aggrieved if someone does not follow me, if I don’t fit into their reasons for use, why would they?

There’s my list, that’s the sort of thinking I go through when I look at an account. It has to fit with what I can cope with and what I am interested in. If I don’t follow you after you connect with me, it’s not necessarily you, it’s probably me 😉

Look, a new error image for Twitter. Nice, it’s even got robots, but I wish they would please hurry up and move to the new servers and get it a little more stable. 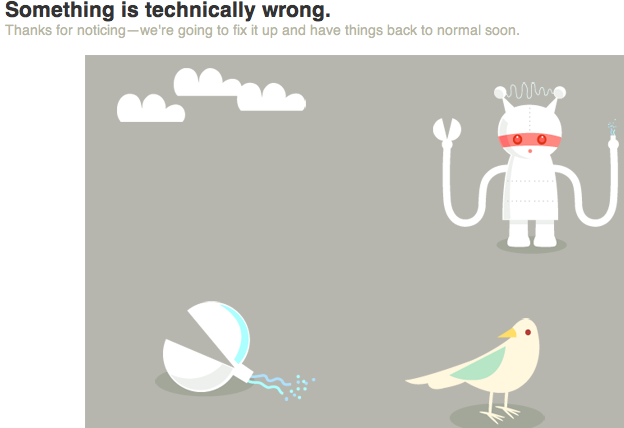