A tea pickers strike in West Bengal threatens the countries tea harvest and therefore the traditional British cuppa, without which no self-respecting English person could function (why can’t we have a gendernonspecific adjective like american?)

It’s actually a serious report about wages and conditions….although they could always outsource!

Marvelous scenes in the Mall yesterday, as 250000 people watched a celebration and commemoration of the end of WWII, 60 years ago. There’s a few photos around on Flickr, try here for MOD stuff.

The flypast by the period planes was something you don’t see everyday; the last plane, a Lancaster, had it’s bomb hold filled with one million red poppies, which were release to float down over the watching crowds.

On the London News Review

When they try to divide our people or weaken our resolve, we will not be divided and our resolve will hold firm.

We will show by our spirit and dignity and by a quiet and true strength that there is in the British people, that our values will long outlast theirs.

The purpose of terrorism is just that, it is to terrorise people and we will not be terrorised.

I know it’s Blair’s speech, but it reflects much of the attitude of the posts from Londoners I’ve been reading.

I took a bus home – and it was quicker than usual; got on and immediately regretted it, but stayed on, with everyone else who filled up all the seats. But I caught myself watching all who got on, all who looked different, just wondering if thwere were more bombs out there. The fact that I was worried about getting on buses, and suspicious of people today makes me angry.

The British are ‘used’ to this, in a way that we really should not be. I was not in London when the IRA were regularly bombing, but the situation then changed activities across the whole country. I grew up in a normality that affected me at a sub-conscious level. Even now, years since the last bomb, I go to train stations in other countries and know something is wrong – then the brain kicks in and I remember that stations are supposed to have left-luggage lockers and metal bins.

At work, there appeared to be panic, just anger and resignation. Everyone I know is safe – but that was luck I think. One person at work was in Russell Square/Tavistock Rd when that bomb went off…she spoke about her morning:

– A loud bang; not like in the movies but a bang that got louder and louder. Instinctively thinking it’s a bomb.

– Spinning round to see a car in the air, landing heavily. Then silence.

– Screams. Shouts. A white house stained with black and red.

– A step towards the noise; debris starts falling, batting it away. Then someone yells – ‘Run’. And people do, flight instinct kicking in – get away.

– Running to work. The surreal sight of people going about normal business, standing outside offices smoking. Starting their day with no idea what happened.

Now, I’m watching the news, with 37 confirmed dead, over 700 injured. Knowing there’s likely to be more fatalities as there are seriously injured people in hospital. Wondering how the hell only 2 people are confirmed dead in that bus, that looked like it had been peeled open. Thinking about all those people whose lives have utterly changed today. 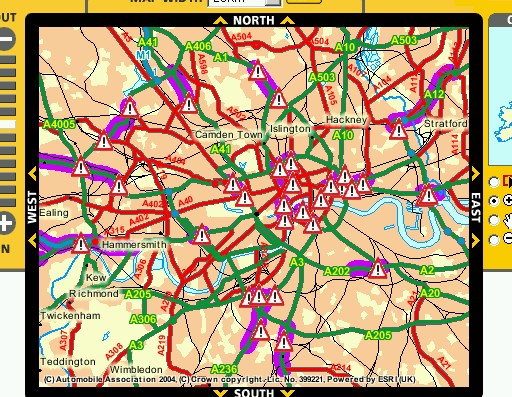 7 blasts, across Tube and buses. Mobile phone not working as they are been restricted to to emergency services; also some news that mobiles may have been used as a trigger. Very few trains coming into the city, reports that road traffic restricteds. All the blinds now closed on the building to protect from bomb blasts; the Prime Minister states that it was definitely terrrorists (although that’s a blindingly obvious statement giving the pictures we’re seeing).

One weird thing is looking down onto Oxford street and seeing no buses at all, and very little other traffic. Normallly its chockablock with buses, all nose to tail.

We’ve been advised to stay in the building.

After the jubilation yesterday, complete terror today. London closed down, buses and tubes blowing up and the army apparently called out. No one knows what is happening, mobile networks down. Evryone starting at the TV.

Went down to Trafalgar Square (photos) for the announcement about the Olympics. Cheers and clapping all around at the result, in the typical slightly muted english way, or was it because there was absolutely no room to do anything except clap. Swooshing banners, smoke and zooming jets were the offical celebrations,I gues there is more to follow. 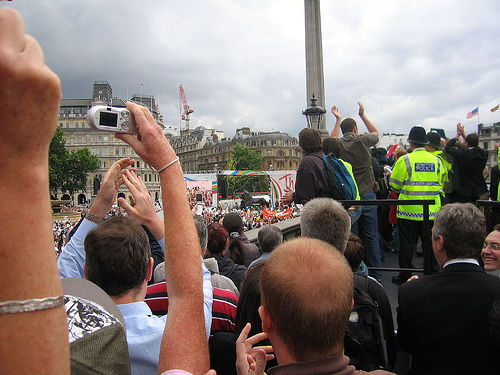 Take a look at Panos London’s AfricaVox, a collaborative blog from African journalists who are here coveing the G8 summit. I like Salamatu Turay’s account of her first peaceful protest on Saturday (good job it was not yesterdays).

In the build up to yesterday’s Deep Impact, an astrologist in Russia attempted to stop the collision by sueing NASA, as the collision would ‘affect the balance of the universe’ and her horoscope would be awry. Obviously she failed in her effort to get an injuction to stop it, but wonder if she can continue to calim damages if anything happens to her…

In fact without one you’ll a become practical nonentity
It is the card that proves you have a national identity!

Continuing on the more political theme, g8rally.com allows you to sign up to the petition that can be found at live8live.com but also allows you to add a message, and read the other mesages.

I could moan about the BBC coverage; they had a few too many ‘celebrity’interviews at the start of the show, which I guess dried up as the backstage guests got stuck into the hospitality and they did not show any of the videos that were playing between the sets, videos that had made to illustrate the points beign made. But at least I’m not in the US, restricted to watching on the commercial music channels (unless I have web access). Take a look at this comment thread over on Live8 Insider to get an indication of how it could have been.

Some random quotes from the various interviews the BBC held inbetween sets or from people on stage.

Jeremy Clarkson: It’s better to try than not do anything at all

Neil Morrissey: trying to eradicate some poverty in the Third World, I mean Africa

Stereophonics: turning up and doing a couple of songs, that’s the least we could do.

Bob Geldof: there are over three billion people watching you now…

Will Smith (standing next to an original US Declaration of Independence on the Phily stage): today…Declaration of interdependence..this truth is self-evident, we are all in this together, every three seconds in the poorest courtries in the world a child dies of poverty…just like that someone else is dead, every 3 secs somebody’s son, somebody’s daughter, someones future is gone …8 men can make a world of difference in the lives of billions of people.

Bob Geldof: I know it’s a cheek but I couldn’t resist, I just had to play on this stage (launching into an unscheduled version of I don’t like Mondays).

Midge Ure (immediately after Geldof on stage): I’m alright, epecially after hearing that, which was dreadful, but it was Bob, what do you expect?

Midge Ure: It’s about standing up and being counted…. give us your soul, give us your feelings. If it was your child dying…you’d doing something about it, but because it’s Africa we push it away.

George Aladiyah: Africa has received more aid than every other area in the world…it’s not money, it’s about giving people opportunities, getting off people’s back…giving people the way to earn their own money.

Brad Pitt: By the time this concert ends this evening, 30000 Africans would have died because of poverty…this does not make sense.

Watching Live8 in London on the BBC, U2 finished and Coldplay on at the moment. I thought to try and get the sound going through the PC, which has a far better system than the telly, but nothing is synching. BBC Radio is about 10secs behind and the AOL webcast is about 30 seconds behind. Now the obvious thing to do is re-arrange the connections so everything works together, but me, wires and moving furniture do not go well together.

The march continues in Edinburgh, Technorati continues to gather posts (of all opinions). The Live8insider blog have some great backstage photos, plus exclusive Tshirts to win…

Andrew Marr being interviewed..”you used to have movements, now you have moments”. So is all this technology making these multiple moments, captured with cameraphones, text messages and blogs into a longer term movement. Or is does life continue to accelerate, with many seeing their momentary interaction as enough.

Via Global Voices Online a slightly different perspective on Live8. A Kenyan blogger at Thinker’s Room
wonders why such a concert should be held and the benefit of it:

Meaningless concerts and laughable commissions are not going to fight any poverty. Even dubiously benevolent concessions like debt cancellation are meaningless in themselves. It is utterly meaningless to cancel my debt if you do not allow me to earn money. Let us both compete fairly on the International market. Your farmers are already enjoying considerable technological advantages — they do not need subsidies. Don’t wax lyrical about debt relief if without avenues for me earning my own money I shall promptly be in debt again.

As I left NYC this morning, the city had got barricades all down 5th Avenue in preparation for all the viewers for today’s Gay Pride parade (lots of pictures of the event over on Fickr). Yesterday, there was a smaller event, a lesbian march which appeared to be a far more serious affair. Except for one women, who’d dressed in red dominatrix gear and was tied up to a post on a small trolley on tiny castors/wheels. Good idea – execpt for the potholes; she kept getting stuck and having to be dragged over the lumps, before unceremoniously tumbling to the floor. I’m sure it wasn;t the first nor the last time – she’ll have some bruise to show for it!

The Register has a good piece about getting things done by just getting things done. By ‘Doctor John’, it details working in IT support for foreign language teachers in Inner Mongolia. An well written account of working sonewhere where rules can be broken, if they exist at all,