I’m not sure I’m very good foodblogger. I feel I should have a little notebook and quizzing the waiter about exactly what is on the plate and making detailed tasting notes, instead, I often have to read other reviews to work out exactly what all the bits are. I always know the main part, but all the subtleties I can miss. My description range can be lacking too, I tend to grade food as don’t like, OK, like. And I very rarely find things I don’t like and will always finish a dish! The other thing I notice on reading reviews is that I seem to have missed the agreed style, which is saying something about the chef, the restaurant, the decor and scoring things. Unlikely to do that though, you’ll get photos and impressions.

On that bombshell, onto my latest restaurant – Texture. I had time between 2 appointments on Saturday for lunch and decided to see if one of the one’s on my list was a) in the right area and b) had room! So sorry Robert, you’re not early on my exploration through London Michelin restaurants because I have gone through and graded them all in advance, but because you were the right one at the right time! Robert was the very nice gentleman who greeted me and was curious as to why, this English, London woman, was dining alone on a Saturday lunchtime. I didn’t quite match the other dining parties which appeared to be a mixture of women friends out for a great gossipy lunch or tourists? It’s all to do with working my way through my list 🙂 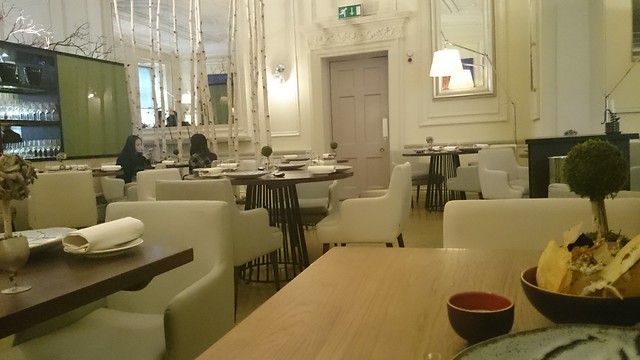 The dining experience was excellent. Starting with the basket of thins – breads and fish skin and other stuff, served with a lovely yoghurty creamy dip. Then bread proper, which I found out was from Hedone, my other favourite Chiswick restaurant. (the room looks quiet, that’s because it was just past noon. By the time I’d finished, it was full) 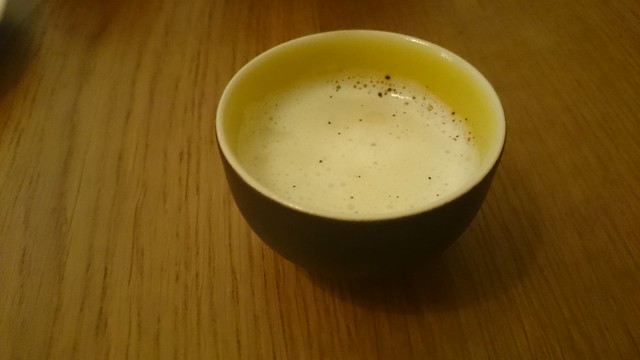 First up, a little soup, cream of celery with hazelnuts. not too much, just enough to wet the appetite. The picture has nothing to scale it.. but it was tiny teacup size. The nuts were an interesting addition, adding to the eating experience 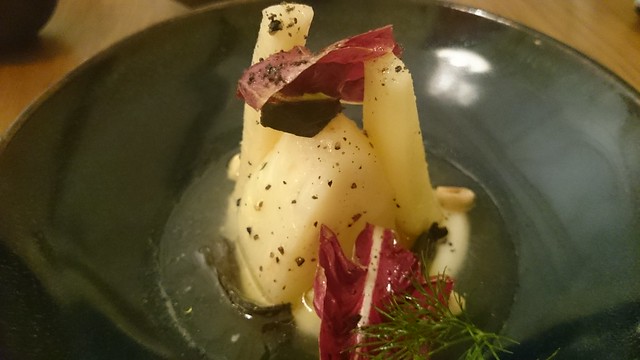 The Winter vegetables.. I was surprised that the vegetables were cold but that definitely brought out the flavours. I think there was celeriac and parsnip and one other (see told you I needed to take more notes), combined with a very interesting broth that felt both creamy and fresh at the same time. Could definitely eat a lot more of this! 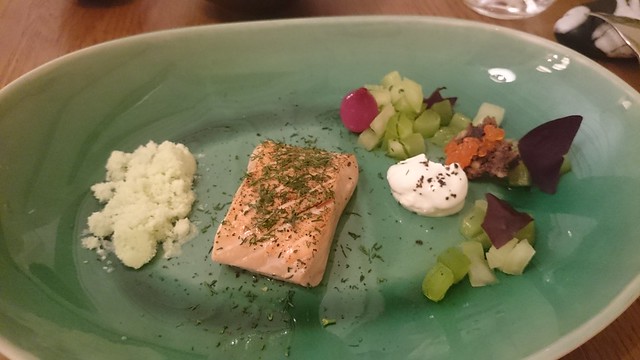 Salmon, cucumber snow, pickled cucumber and apple, creamy sauce, a bit of salmon eggs. Not sure the salmon eggs added much to this dish, but was a tasty bite. The salmon was just on the edge of cooked, which I loved, the edges more solid, the middle softer and just warm. Cucumber and apple complementing with the sharper flavours. And cucumber snow. Lovely! it may be on trend, but I’d love to know how to make it, how it concentrates the essence of cucumber. I could eat a whole bowl of this 🙂 A touch of dill added flavour, as it did in the previous dish. At this point in the meal I did wonder if it would a consistent theme. 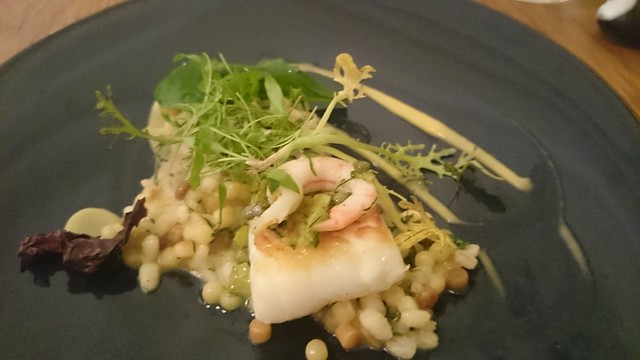 Cod, prawn on a bed of barley, grapefruit and capers. I loved the cod. Unlike the salmon, this was cooked fully throughout with one side really crispy, which provided the texture contrast. Whilst I loved the base, in hindsight, I think it was just about one large spoonful too much (yes, I always eat everything). The capers and grapefruit added punch, but the barley is always more about texture than taste and I could done with a little less I think. The care taken with cooking the two bits of fish in these two courses was obvious, getting two different results and mouth feel. 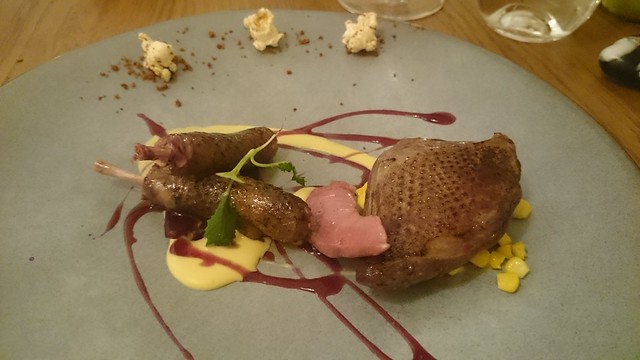 I am slightly confused with this dish. It appears to be listed as Anjou quail in online menus and reviews but I’m sure my menu said pigeon. And it looked and tasted like pigeon! So maybe they had a change and swapped pigeon for quail at this time of year – there are definitely recipes for Anjou pigeon around too. Having seen some of the pictures, I was quite happy that they were serving it without the claw attached to the legs! So breast of pigeon and legs that were formed into sausage type things on a stick. Plus corn 3 ways – cream, sweetcorn kernels and bacon popcorn! I nearly had to embarrass myself when eating this dish as with my little finger in pain, it was a little difficult cutting the meat and I thought I’d have to ask for help! but I managed it in the end. The neat was very tender – cooked sous vide? – but i think the skin could have been a little more crispy adding that flavour too. The dish was finished off with a shallot and red wine sauce. 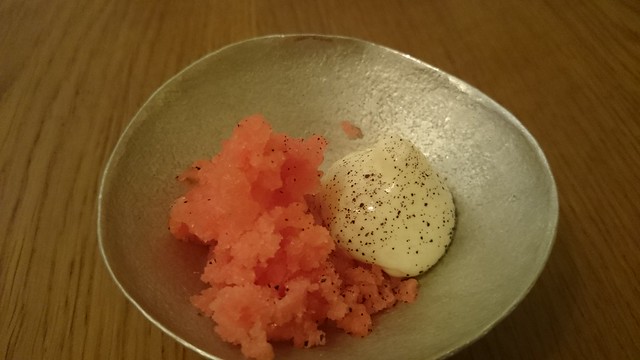 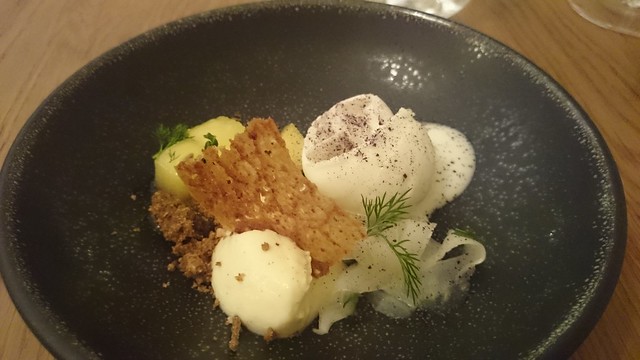 A quick palette cleanser of blood orange ice and sabayon. Then the main dessert (and my notes failed me). There’s shaved fennel, a crumble mix, an icecream, some fruit. Yes, forgot what was in it. So OK, tasted great but not memorable for me. Except for the fennel, that was unusual and balanced everything out well. 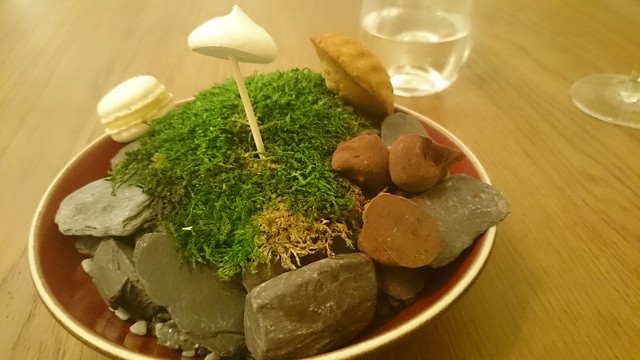 Finally, sweeties! I love little sweeties like this. I’m not sure, but it tasted like the puff in the middle was flavoured with menthol? Or would that be pine with the northern influence? I’ve read somewhere it was mint.

Lovely dining experience overall, some great mini-chats with the team. A couple of the dishes were not quite for me, but I could still recognise the excellence in putting them together. So recommended! I went for the Lunchtime tasting menu, but the smaller lunch set menu appeared very popular and great value too.