Over the last few days I’ve been working my way through all the back episodes of Jericho from CBS. As I usually do, I turn to Wikipedia to see if there any additional pieces of information to add to my enjoyment of the show (I’m a trivai freak at times). The show has a loyal base of online fans, as the wiki episode guides are pretty complete, which is not always the case; if you take a look at the CSI listings there’s very little info there which I find surprising for one of the biggest programmes on TV.

BUT CBS are obviously aware of the fans need to add to the show experience; they have created their own wiki for people to update. You don’t have to sign in to edit and they’ve even created a very nice editing tool so you do not have to know the arcane mark-up language. 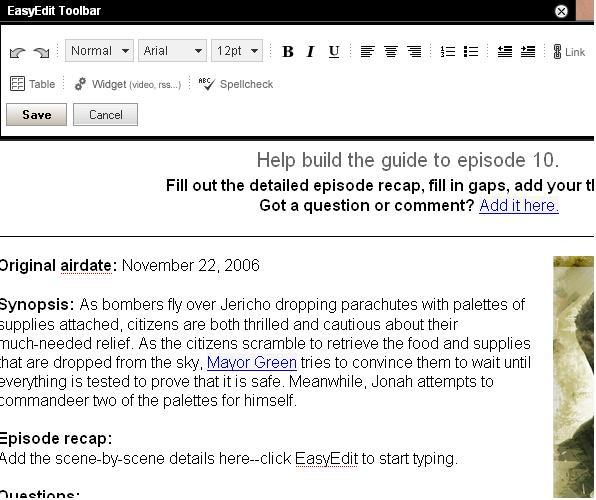 But you are not getting the same contributions as wikipedia are getting. It’s easier, there are a lot more show assets that can be used, there’s a reasonably active message board on the site that demonstrates that fans are involved, but little action to document the show. So some thoughts about why not:

Whatever the reason for the reduced participation in documenting the episodes they are doign a lot of other things to gain interest in the show, with online chats, Q&A for the producers and just a lot of extra content.