I love this BBC article about the scientific explanation for Beer Goggles. The study, from University of Manchester, was sponsored by an eyeglass company Bausch and Lomb, I’d have thought that if they have a study released for PR, they may have at least put it on their site but nothing on the UK or US sites.

Nathan Efron, Professor of Clinical Optometry at the University of Manchester, said: “The beer goggles effect isn’t solely dependent on how much alcohol a person consumes, there are other influencing factors at play too.

“For example, someone with normal vision, who has consumed five pints of beer and views a person 1.5 metres away in a fairly smoky and poorly lit room, will score 55, which means they would suffer from a moderate beer goggle effect.” 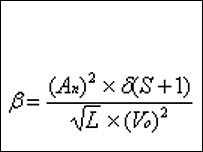 Where An is Alcohol consumed, d is distance, S is smokiness, L is luminance and Vo is visual acuity.

Putting all of this together, you should be able to calculate at what point the beer goggle effect kicks in; at which point you are probably too drunk to care 😉