On the 11th hour of the 11th day of the 11th month of 1918, The Great War, the war to end all wars, officially came to an end. Since then, the time has been used to remember the fallen, those who gave their lives for their country, with no though of politics. Every year, the Royal British Legion run the Poppy appeal to raise funds to support soldiers and their dependents who have been affected by war.

Take a moment and remember them 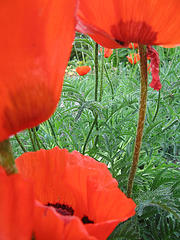 They shall not grow old, as we that are left grow old:
Age shall not weary them, nor the years condemn.
At the going down of the sun and in the morning
We will remember them.

For the Fallen, Laurence Binyon

One thought on “Lest We Forget”