Thought about putting wonderful, wonderful Copenhagen as a title but as it’s so much of a cliche that it’s even the theme of the official welcome notice at the airport, I decided not to. I finally got here after a slightly delayed flight to find a city that really reminds me of Amsterdam, enough so that I want to answer with questions with the small amount of Dutch that I know.

First port of call (after the hotel) was thePre-conference Meetup for drinks (following a wee bite to eat). I caught up with some people from Tuesday nights Geek Dinner and met some more, inckuding Nicole Simon, who I recognised from her voice, having listened to her podcasts. There was free wireless at the venue which was used by many, including this lot in the picture below. Nicole, Maryam and I decided on the appropriate caption “Bloggers finally discover European late night TV broadcasts over the web” 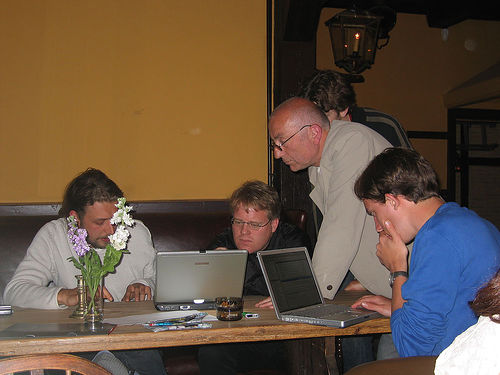 Take a look at this use of dynamic mapping in Switzerland, which was actually the item being blogged at the time

Meanwhile, I’ve found me another use for Flickr. I’ve not yet loaded any graphical/imaging software on the new laptop, so had no way to reduce the size of the image above. So, upload to Flickr and then download a smaller size gives me an image that won’t kill the load times. Not that amazing discovery, but it’s the small things that help.