I took some time off yesterday and ended up in Trafalgar Square during the broadcast of the memorial service for the victims of the July bombings. There were a lot of cameras there, both TV and press. Most people watched and contemplated, except for 2 I noticed. The first was a guy who wondered round striking up dramatic poses, arms outstretched, clapping his hands between poses to get the photographers’ attention. The second was far more unassuming, just wandered around clutching a large picture of Princess Diana for some reason, in a kind of tribute. He too was the subject of many photos.

I nipped into the National Gallery whilst there and had a quick scoot round. The Gallery is trying to do some customer research; every person looking at one of the new aquisitions, Madanna of the Pinks, was asked to fill out a card. Instead of asking questions there and then, which is what I expected, it askedfor demographic detials and then permission to contact you for further research – so I guess they are going to do focus groups instead of a straightforward questionnaire. My reaction – How much!!! At around £340000 per square inch it’s a very expensive aquisition, even if a nice painting. 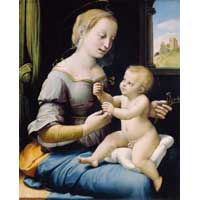