Yahoo! are running a poll to find the most popular find of 2005. There are serious categories: Community has things like the Can Do Exchange to share skills and knowledge; Educational looks at things like the Mars Rover site But the papers (or at least the Metro) are covering the wilder side, the weird and wacky ones. Two sites that do exactly what they say on the tin are Stuff on my Cat and Punch a Celebrity. Vote for your favourites.

Tools to analyse what bloggers are saying continue to be delivered. Opinmind allows you to add a term and see the balance between positive and negative comments.

Following on from her tips on how to survive a geek dinner, Maryam now lists great reasons for dating a geek; see the comments for the reasons with a twist as well. One of the key ones is they can fix your computer. I can fully understand that one…I’ve finally got my desktop back up and running after the hard drive went kaput, only after a lot of hours put in by some geek friends.

Microsoft have released a critical patch for the WMF exploit earlier than planned, “in response to strong customer sentiment that the release should be made available as soon as possible.” Microsoft being reponsive to lots of feedback instead of waiting for the monthly update slot they were going to use. Don’t forget to uininstall the unoffical patch if you used it.

Having just downloaded the beta for Messenger 8 – or do I have to call it Windows Live Messenger – I was surprised to find I had to agree to T&Cs twice; once before downloading and the second on installing. But signing them twice does not reduce the impact of the default settings…not really taken by the orange and grey combination. 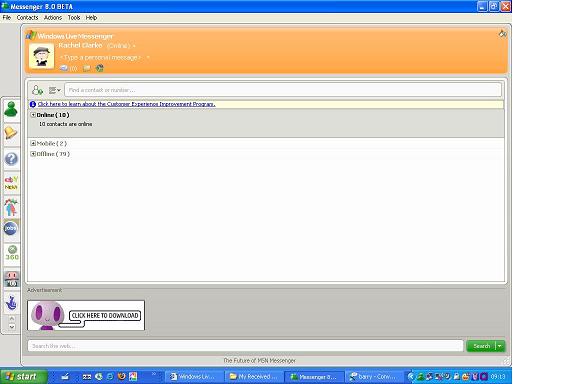