Dave Sifry of Technorati has posted his lastest update on the State of the Blogosphere.

The company is now tracking 19.6m blogs, the with the trend of a doubling every 5 months appearing to continue; currently 70000 new blogs are created every day. This time, he’s also included details of splogs, showing they are running at between 2-8%

Daily postings, at around 33000 an hour, appear to have slowed recently. 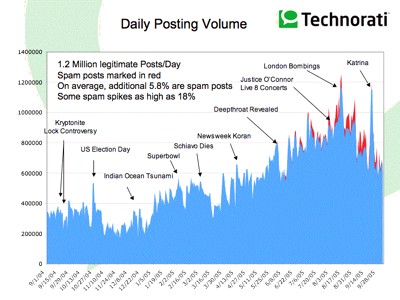 Is this because the surge since June has been due to school-aged children posting who are no longer on holidays or because of the increase in new blogs, driven by the interest, whose posts rapidly fade away. As blogs increase in numbers and popularity, the challnge now is making sense of the information.

Talking about posting volume, I’ve just seen that I’ve reached my 500th post in just under a year. That’s an average of 1.4 posts per day over the last 12 months.