Comparing last night’s get together with one that took place earlier, where Robert Scoble was the speaking guest, there were definitely differences. Last night had a far higher proportion of women, I’m guessing attracted to the Marketing label instead of the Geek one. I saw far fewer cameras and far more notebooks – a lot of people took notes throughout Seth’s speach. I’d even go as far as saying the dress sense was more ‘business’ like than previously. Rick Segal and I were discussing doing a straw poll about why people attended and how they heard about it – but we did not really get much further than just discussing and never took the poll.

One thing that was completely the same was the behaviour a the start of the evening, where everyone stayed on one half of the room and did not move past an invisible barrier provided by a couple of columns. So, everyone huddled, a little cramped at times and did not break the line until food was served. 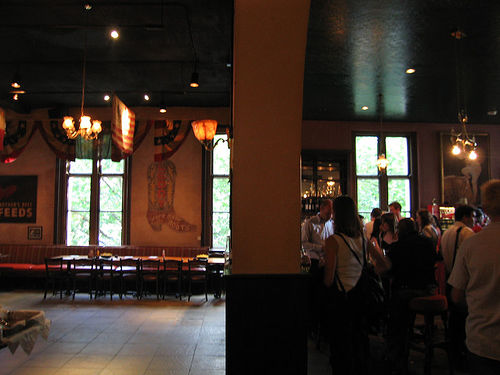